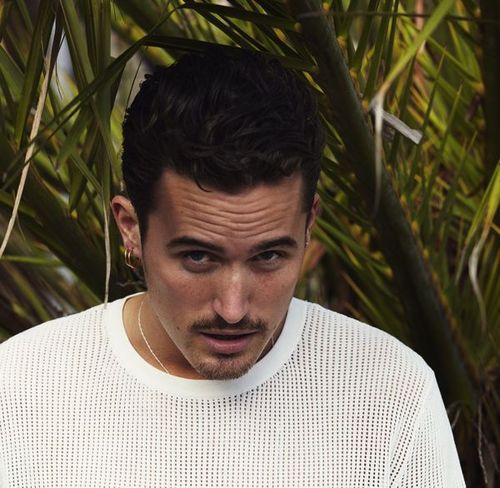 Following his success with acts like Duke Dumont and Rudimental, it seems that everything producer MNEK touches turns to gold and his latest concoction for rising pop crooner Tom Aspaul will without a doubt continue his momentum. The two Londoners collaborated on "Indiana" that is impacting blogs now and is best described as a stomping slice of electronic soul-pop that sets the stage for bigger things to come. The track is released on On Repeat, Little Boots' new indie imprint, that is the perfect breeding ground for up and comers like Aspaul who serve up a sound that is slightly left field yet has massive mainstream potential. Aspaul has also spent time recording with MKS, Syron and Jakwob plus "some other pop kids," according to a press release so stay tuned for more sweet and crunchy pop goodness from this newcomer soon. The global success of Avicii's "Wake Me Up" is a major boost forward for emerging soul crooner Aloe Blacc who co-wrote the song and contributed his vocals. I spoke with Blacc at the Ultra Music Festival in Miami back in March the day after he performed the song for the very first time together with Avicii. He explained that working with Avicii and experimenting with EDM was a new experience for him. "I enjoy electronic music, but I come from the house side of things," he told me. "The relationship hip hop has with house has always been very interesting to me. When you look at artists like De La Soul, A Tribe Called Quest and Jungle Brothers, and how they flirt with house music and digital music."

Today, Blacc released the video for his acoustic version of "Wake Me Up" that is part of a bigger initiative that the singer/songwriter wants to stir awareness for. The video tells the story a day laborer family striving for a better life and struggling to be united across borders. It's a storyline that fits the uplifting and inspiring lyrics of "Wake Me Up" perfectly. (Learn more about the making of the video here.)

As the U.S. Congress turns toward the question of immigration, Blacc chose to collaborate with the immigrant rights group, National Day Laborer Organizing Network, the abc* Foundation’s Healing Power of Music Initiative, director Alex Rivera and a cast of actors who have real-life experience with the topic in order to give a human face to the immigration debate and send a message of inclusion to Washington.

Born in Southern California to Panamanian parents, Blacc knows first-hand what it's like to be part of the immigrant community. "Having grown up in an immigrant family myself, I know that the stories in the video are not a fiction," Blacc explains in a press release. "It’s time that we wake up about immigration and I hope our video can help do that."

"When people get to tell their own stories, art and life converge," explains Pablo Alvarado, director of the National Day Laborer Organizing Network. "With the video, Aloe’s song becomes a soundtrack for the moment and shows the world that both day laborers and dreamers are deserving of respect and inclusion."

Blacc's acoustic version of "Wake Me Up" is taken from his new Wake Me Up EP, his major-label debut via XIX Recordings/Interscope Records, that also includes tracks "Love Is the Answer," "Can You Do This" and "Ticking Bomb." After stirring up a storm of interest among bloggers and other pop aficionados, Say Lou Lou (formerly Saint Lou Lou) is gearing up for the release of their major label debut single "Better In The Dark" that will be released in the UK via Columbia Records this December. Frequent readers of this blog may remember that I first alerted you about the twin duo of Miranda and Elektra Kilbey when I reviewed "Maybe You" in the summer of 2012. "Better in the Dark" will be released alongside new track "Beloved," which is the official B-side of the release

Deeply melancholic and intensely soothing, Say Lou Lou delivers more of that indie pop goodness on "Better In The Dark" that got them noted (and signed) in the first place. Their lush and shimmering sound (courtesy of producer Richard X) also further defines the group's musical identity.

"The concept of Saint Lou Lou is duality," the group's Miranda says in a chat with Interview Magazine who lists of Burt Bacharach, TLC and Fleetwood Mac as some of their inspirations. "Between us being twins, one dark and one light. Our music is both dark and light. Some people say it’s a happy, dancey thing, and some people feel it’s dark and ethereal."

The juxtaposition between dark and light may have been inspired by many frantic days that the duo spent traveling on a Boeing 747 between their homes in Stockholm and Sydney. Their jetsetting ways and sense of displacement is clearly reflected in their music that ultimately is driven by a search for belonging. "We tend to think of our songs as narratives," the duo adds. "Building up the scenery and mood with lyrics and sounds are a really big part of our process. It is like writing the script for a film to us."

A Few Words about Lady Gaga's 'Do What U Want' featuring R. Kelly (And Why It's One Of Her Best Songs Ever) 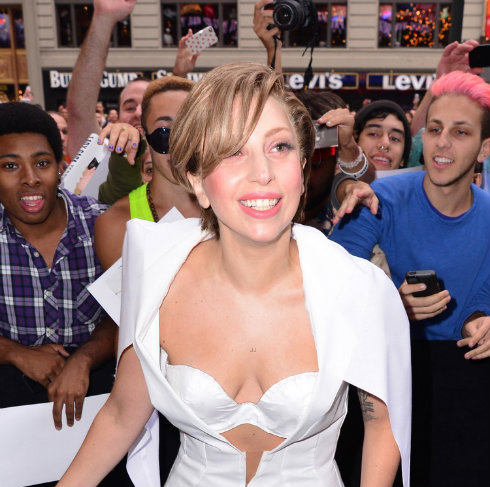 Think what you want about Lady Gaga, but this week she served up one of the finest songs of her career that has people nearly unanimously cheering along. The unveiling of "Do What U Want" came on the heels of a series of messages from the pop star on Twitter, point by point tackling criticism she has received over past eighteen months. In true Gaga fashion, she showed that the best way to deal with skeptics and other naysayers is to present a song that would simply silence them.

The timing was perfect for this seemingly impromptu unveiling. After the carefully planned out premiere of "Applause" stumbled this summer following an online leak, Gaga bounced back with an imaginative performance at the MTV Video Music Awards. According to weekly Mediabase reports, "Applause" is now a bonafide radio hit that continues to add spins on Top 40 radio. "Do What U Want" continues the upward motion as demonstrated by the fact that it shot straight to number one on iTunes and will likely impact radio next.

Remember. There's a reason she starts off "Do What U Want" by singing the lyrics: "I feel good/I walk alone/But then I trip by myself/I stand up/And then I'm okay. "

Gaga's ability to slip and quickly get back up again with quality music may ultimately be her greatest skill as a pop star. It seems the more people say "no," the more she wants "yes." It's as if she feeds off controversy and uses the chaos of opinion to drive her creative process. In fact, to stir the discourse she often veers slightly off the beaten path with an aesthetic that is edgy and may be perceived by some as overly ambitious at times. (In fact, I would not be surprised if this interplay of imagery and perception is an important and very deliberate component of her Artpop vision.)

But if her antics bother you, don't let them distract you from the music she puts out. "Do What U Want" is a perfect example of Gaga's skill to surprise. It shows off her laser-sharp vision to take a risk and cook up something unexpected. In theory, a duet between Lady Gaga and R. Kelly seemed almost impossible. But the collaboration between the two music titans is nothing short of sublime that is smooth yet rhythmic, and straight up yet poetic.

I think one of the song's biggest contributions is that it's an accomplished homage to classic pop duets. The charts nowadays hardly feature duets anymore between big names in music. It's almost all rap features here and vocal features there. Even though "Do What U Want" is billed as a track with an R. Kelly feature, it's truly and technically a duet with the R&B superstar who performs more than just a hook.

It's not clear what the rest of her Gaga's forthcoming "Artpop" will sound like (except from "Applause" and a few other snippets here and there), but it seems like the pop star has a few more tricks up her sleeves that indicate a refreshed focus that is reminiscent of the Gaga we admired so much when she just got started. 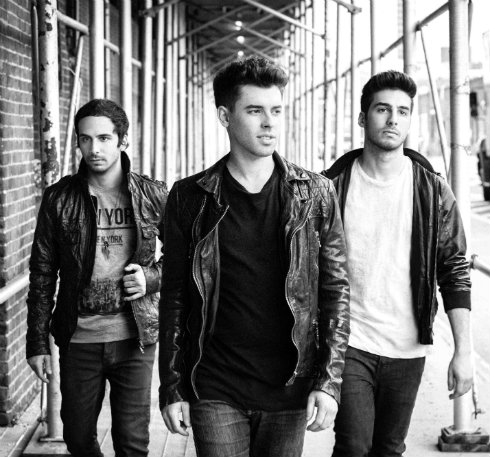 While their crossover smash "Take Me Home" featuring Bebe Rexha is gaining chart momentum and continues to add spins on Top 40 radio, the guys of Cash Cash unveiled their new single "Satellites" last week to satisfy our appetite for more new music. The song gives us a few more clues about the trio's brand of melodic dance-pop that goes way beyond the big, mighty drop that is ruling much of the current EDM scene.

Cash Cash first rose to fame after the success of their remix of Krewella's "Alive." But the group of Jean Paul Makhlouf, Alex Makhlouf and Samuel Frisch started their musical journey way before that. The group initially started out as a band touring alongside groups like MetroStation and Cobra Starship, and performing the Vans Warped Tour.

When their drummer left, the group started to experiment with Ableton and other software to develop beats that fueled their interest in producing and electronic dance music. One of their first successes as a production outfit was the track "Michael Jackson" that was put out by Spinnin' Records and firmly established them as a emerging act in EDM.

After playing shows all over the world, tracks like "Take Me Home" and now "Satellites" represent a return to the group's songwriting beginnings while also incorporating their experience as dance producers. "Satellites" is a tightly-produced, glowing brew of uplifting synth-pop that is ruled by the anthemic cheer "We're the satellites/We keep on moving" that neatly accentuates the tune's massively infectious hook that is, quite frankly, too irresistible to be denied. File next to work by Empire of The Sun, Chromeo, The Knocks and Capital Cities. (Cash Cash "Satellites" will be released October 29 via Big Beat Records.)