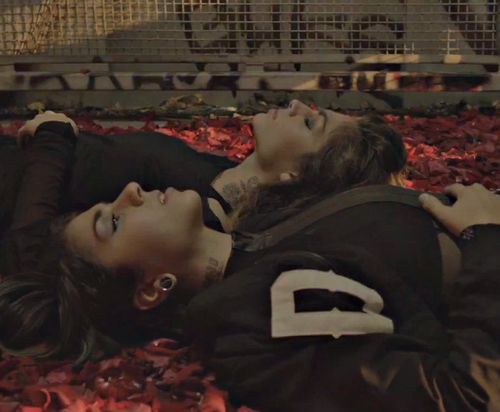 Krewella and my fellow Hollander Ricky Romero raise awareness for cancer patients in the freshly-unveiled music video for their new single, "Legacy." Set to Romero's stirring house-pop beat, the video tells the love story between a cancer-diagnosed mother and her son who becomes an empathetic vigilante in the dark of night.

The video was directed by Kyle Padilla who previously also oversaw the production of videos for Nicky Romero & Nervo ("Like Home"), Sebastian Ingrosso & Alesso ("Calling") and Charmin Liars ("New Disorder"). The Los Angeles-based Padilla explains in an interview that he was inspired to come up with the concept for the video a couple of years ago. "A relative of mine was diagnosed with breast cancer," Padilla tells MTV Buzzworthy. "It was on my mind a lot, and I had been waiting for the right track to pitch it to."

Padilla adds, "My goal is for this video to raise awareness for breast cancer in an honest and respectful manner."  In fact, three of the actors who shaved their heads in the video donated the hair to Locks of Love, an organization that makes wigs for children undergoing chemotherapy.

Padilla goes into more detail about the story of the video (that comes with a surprise ending). "While the mother struggles with her chemo treatment and its effects, her son is determined to do whatever he can to help her feel better - even if that means bashing in her co-workers car. Although his actions are misdirected, his genuine concern and determination give her strength to continue on her fight against cancer."

This captivating and important story is interspersed with scenes of Nicky Romero and Krewella performing the song. Jahan and Yasmine add a dose of grit and vocal power to Romero's soaring production to bring the story of the video to life. "When the world's around me/We're caving in/You save my life tonight/When there's nothing left but pouring rain/You save my life tonight," the two sisters harmonize beautifully.

The video is a fitting complement to the song that first appeared this summer in Romero's sets. "You know, they are very nice people," the Dutch DJ says in an interview about Krewella. "They're super talented. So, I think they're one of the biggest rising stars. And they're also super-humble, and I'm really happy that I could do a song with them."