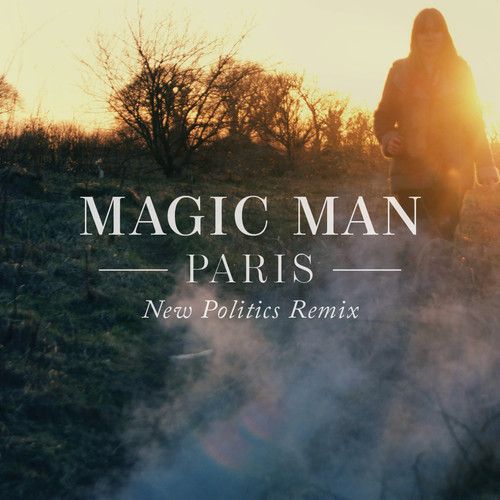 Magic Man don't shy away from mixing up buzzing synths and flaming guitars to serve up a hot and happening brew of hyper-melodic indie pop. Hailing from Providence, Rhode Island, the group is the teaming of Alex, Justine, Joey, Sam and Daniel who are currently stirring up a storm of interest on tour with Sir Sly and Walk The Moon. Early next year, they will join fellow upstarts New Politics for a trek around the country and to celebrate their tour New Politics have remixed Magic Man's magnificent "Paris."

"Paris" was inspired after Sam and Alex spent some time in France after their freshman year of college. "It's when we started writing what would become the first Magic Man songs," Sam explains in a recent interview. "Alex also studied abroad in Paris for a semester, so France has always been an important part of Magic Man’s history."

He adds, "['Paris'] was our attempt to recapture a little of what Paris felt like to us and bring that to life in our little studio back home."

The track is taken from Magic Man's 5-track EP, entitled You Are Here, that is filled with propulsive and mightily infectious pop gems that you can easily file next to releases by The Killers and Passion Pit. If this New Politics remix has given you a taste for more, make sure to support new pop and grab the EP here. You'll be glad you did.