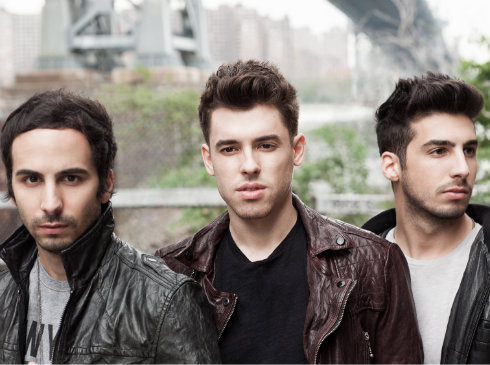 Following the unveiling of lusciously luxe "Satellites" earlier this week, Cash Cash exclusively premieres their brand-new tune "Hideaway" on ArjanWrites.com today. The track is taken from their new EP, entitled Overtime, that will be released on Big Beat next week Tuesday.

Kicking off with a proper bang, "Hideaway" is another high-energy Cash Cash stomper that features the larger than life vocals of Ella Eyre who injects the tune with a massive dose of soul that is sure to fire up the dancefloor. It's an accomplished tune by Jean Paul Makhlouf, Alex Makhlouf and Samuel Frisch that not only demonstrates their soundboard savvy but also their finely-tuned knack for melody.

"Hideway" is also a big look for Ella Eyre who slowly but surely is bubbling on both sides of Atlantic with some impressive features. She also contributed vocals to Rudimental's "Waiting All Night" that they performed at last week's MOBO Awards in London. Cash Cash's Overtime EP also features the trio's dance-pop breakout hit "Take Me Home" that features rapidly-rising pop newcomer Bebe Rexha that is currently impacting the charts internationally.

The group's recent single releases is solid proof the the trio's steady musical evolution from being a guitar-driven band to an EDM production outfit with a fascination for pounding electro beats to a pop-savvy group who don't shy away from proudly cranking out a top 40 hit. "Hideaway" is a perfect example of that. It's an adventurous dance pop track with a proper EDM crunch that feels very now but also indicates of where dance pop is heading next. The future is wide open for Cash Cash.