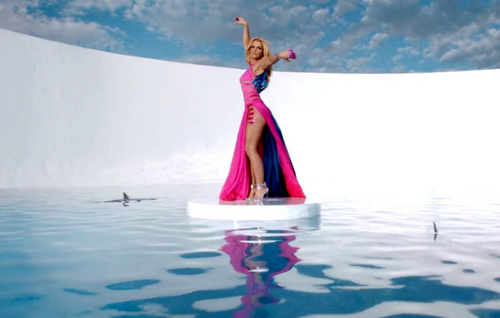 Britney Spears fires on all cylinders in the video for "Work B**ch" that is a feast for the eye. Shot in the Nevada desert back in September by director Ben Mor, the sleek and stylish mini flick shows the pop superstar in full control while dancing, prancing and posing in a rapidly sequenced series of scenes that are styled to perfection. Big kudos as well to choreographers Zac Brazenas and Charles Infante, production designer Charles Infante and art director David King for creating a piece of pop art. (The shark tank scenes are especially killer.)

Director Ben Mor told MTV News in an earlier interview that he was excited to be working with Spears on this video. "I’ve always wanted to work with her,” Mor said. "She was absolutely super professional. She wasted no time, showed up before anybody else. She was spot on time, not a minute late. She did her thing, it was awesome to watch. She just lights up. The music kicks in and it was just awesome. I can’t say enough good things about her."

Word is that Spears' forthcoming album is her most personal to date. Spears co-wrote on all of the tracks with a number of high-profile writers. Spears' manager Larry Rudolph put it best when he told Billboard that Britney's forthcoming eighth studio album is her Ray Of Light effort. "Work B**ch" is a great example of a song that's from this album, but I don't know that it necessarily defines the album," he explained.

He adds, "There's a lot of other material on here that is really rich. There's a ballad called 'Perfume' that she recorded recently. Britney wrote it with Sia. It's a breakup song that's about wanting the next girl to smell your perfume on the guy afterwards. The lyric is really unique and she sings the shit out of it. I think everyone will be really impressed by the song." (And I can attest to that.)