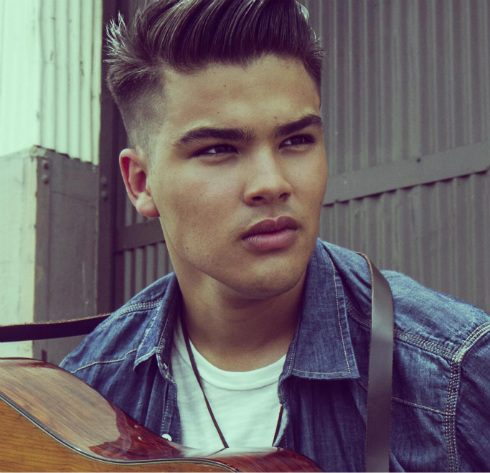 Once in a rare while a new musical voice emerges that makes you instantly sit up and listen closely. Newcomer Romèo Testa is one of those striking new talents who serves up a heartfelt performance that hits you straight at the core. Combining an intensely soulful delivery with poignant songwriting, Testa seamlessly blends rock, blues and soul that is a unique new addition to the pop scene.

Testa's "Still Misunderstood" is solid proof of his distinct sound and burgeoning talent. Driven by a sophisticated melody and a brazen objective, the track is dedicated to the victims of bullying who Testa clearly identifies with. "See myself inside your eyes/I'm familiar with your fears/The pain just ain't right/Because your face don't suit those tears," Testa sings in the song's second verse.

"Still Misunderstood" is taken from Testa's forthcoming debut EP, entitled The End, that will be released through ATO Records on October 22. Download a totally guilt-free MP3 of the song in the player below.

The release of the EP is the culmination of a lot of perseverance and hard work by the young crooner. "I’ve been waiting for this moment my whole life," Testa candidly shares in a press release. "This EP represents me as a person and a musician, my taste in music and everything I want to stand for."

Born in Costa Rica and raised in Los Angeles, where he received a well-rounded musical education from his parents, Testa has been pursuing music since he began playing violin at 7 years old. By 11, he was writing songs in his bedroom with an electric guitar and cutting them on a TASCAM tape recorder, both given to him as birthday gifts from his father. Testa went on to study viola at the prestigious Interlochen Music School in northern Michigan.

Testa's The End was executive produced by multiple GRAMMY winning producer Dan Wilson who knows a thing or two about crafting timeless tunes. He previously worked with artists like Pink, Dierks Bentley, Dixie Chicks, Keith Urban and Adele on critically-acclaimed projects. In fact, Wilson won one of his GRAMMYs for producing and co-writing Adele's evergreen ballad "Someone Like You."

Testa wears his on his sleeve on the EP demonstrating not only his emotive delivery but also his impressive lyrical prowess. One of the most personal songs on the EP is the track "The Hardest Part" that is a song dedicated to Testa’s older brother,who died from bone marrow cancer. Other tracks include "Wish Me Well," a song about leaving loved ones to pursue your dreams, and "With You" that is a tender love song written from Testa’s experience getting lost on the bus on the way to Hyde Park in London.

(Support new pop and download Romèo Testa The End when it's available in a download store near you on October 22.) 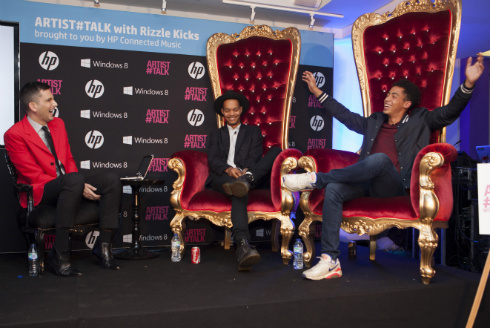 Rizzle Kicks have built a reputation for their feel-good and effortless brand of pop that is totally fun, incredibly clever and masterfully produced. Frequent readers of this blog may remember that I first alerted you about the genre-mashing Brighton duo of Jordan and Harley almost three years ago when they started making waves with their independent mixtape that included tracks like "Miss Cigarette" and "Down With The Trumpets."

I sat down with Jordan and Harley for a full hour two weeks ago in London for a special British version of my ARTIST#TALK live interview series to talk with them about their new album Roaring 20s. The album shows off the group's evolving lyrical prowess, combining stories about being young and living it up with a dose of social commentary about current U.K. youth culture. "The obsession with reality and technology seem to define our generation," Jordan explained.

Produced by the fine folks at HP, it was truly a unique event that was hosted at St. Luke, a historic Anglican church building, that was transformed into a classy interview and performance space. Celebrating music and technology, HP literally rolled out the Blue Carpet for guests and VIPs who attended to see the interview and an exclusive performance of Rizzle Kicks immediately following ARTIST#TALK.

Check out some of the highlights of my ARTIST#TALK interview with Rizzle Kicks in the video below. It was such a fun chat with lots of laughs while also emphasizing the group's serious side. And yes, you're seeing it correctly - Jordan and Harley were seated on two thrones which is a prop they also used in the "Lost Generation" music video. (A big thank you to Rizzle Kicks for being an ARTIST#TALK guest, all the bloggers and writers who attended and last but not least HP for putting together such an incredible event. I was thrilled to be a part of it.) 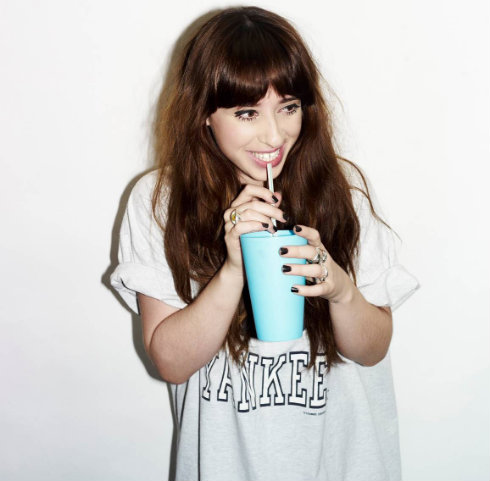 The success of Zedd's "Clarity" has pushed newcomer Foxes right smack in the center of the international pop spotlight. The song's massive success on radio and in the charts is the perfect platform for the young British singer to launch her career in America from. I first alerted you about the the singer when I blogged about her song "Warrior" in September of 2012. Since then, not only has Foxes contributed to Zedd's dance-pop smash, she;s also featured on tracks by Rudimental and Fall Out Boy.

Now signed to RCA Records, Foxes (aka Louisa Rose Allen) is gearing up to release her debut album later this year. Lead single from that record is the shimmering single "Youth" that is slowly but surely starting to impact radio. The tune comes along with a few kicky remixes including a hot and happening remake by The Disco Fries. They are the duo of Nick Ditri & Danny Danger who have done a superb job giving the pop tune a euphoric make-over that is sure to fire up the dancefloor. Very nicely done. [GUILT-FREE MP3] 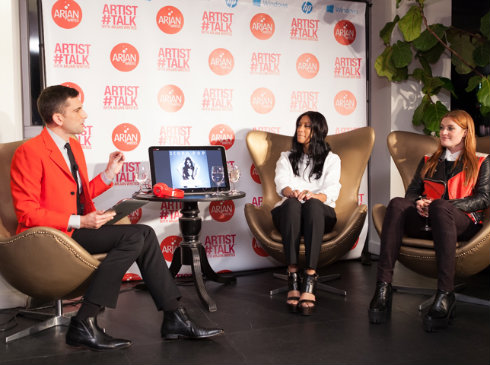 Three years after I first blogged about Icona Pop, Caroline and Aino sat down with me for an extensive interview as guests of my ARTIST#TALK series that I produce in partnership with HP and Windows. The two rapidly-rising Swedish pop stars set time aside in their busy promo schedule this week to kick back, have a glass of wine and candidly share some stories about the making of their new LP This Is... Icona Pop with an intimate group of media guests. We are excited to share the Icona Pop world with everyone," Caroline smiled at the beginning of our interview.

If there was one big theme to the interview, it was that the success of Icona Pop is not only a story about the triumph of great Swedish pop music, but also a story of a great friendship. Numerous times during the interview Caroline and Aino complimented each other noting that they could not have found a better mate to enjoy the group's success with. "We fell in love in a very friendship way," smiled Aino.

At one point Aino even turned to Caroline and said, "If I didn't like men, I totally would date you and we'd be so happy as a couple." Caroline laughed, "But if we were happy all the time where would we find inspiration for our music?"

After playing some new songs from the album (including "On A Roll," "Then We Kissed" and "Just Another Night) from the sleek new HP notebook/tablet Envy X2, we talked in depth about their songwriting process. The group has worked a lot with Swedish producer Elof Loevl ("Icona Pop's third member") but turned to mega producers like Stargate, Patrik Berger and Benny Blanco for some of their newer songs. "No matter who we work with, if it doesn't feel right it won't work," Caroline explained. "We work very instinctively." 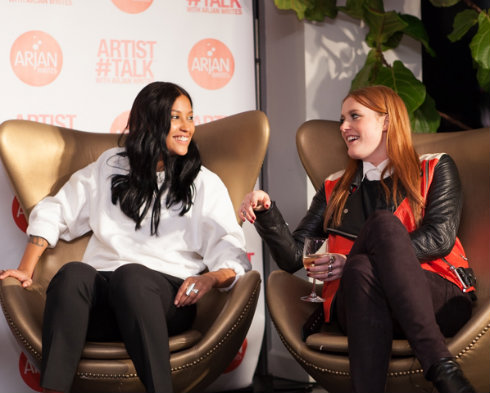 "This album means so much to us," Caroline said. "It's filled with stories and memories of our lives in the last 4 years. Some bad, some good, but all very personal." While we listened to songs, the girls often would giggle and smile at each other clearly remembering the situations that triggered the songs.

Caroline adds, "One of the best things now is that the guys we wrote songs about and gave us so much heartache now avoid us when we see them out and about in Stockholm. Revenge is sweet!"

One member in the audience asked what their favorite karaoke song is. "Sisqo's 'Thong Song,'" they said in unison that was followed by a little sing-a-along of that classic tune.

The duo also emphasized the importance of bloggers and fans who have supported the group from very early on. It was flattering to hear how much the support of yours truly has meant to the group as well. "Arjan, you were there from day one!" Caroline told me. "I remember how excited we were when you first wrote about us. That really meant so much to us." Amazing!

I love Icona Pop and so should you. This Is... Icona Pop is one of the finest pop records of 2013 that beautifully captures the group's bittersweet brand of pop. (Thank you Icona Pop for making time to join me as a guest, all my fellow blogger and writers who attended, and my friends at HP and Microsoft for producing such another great event last night. 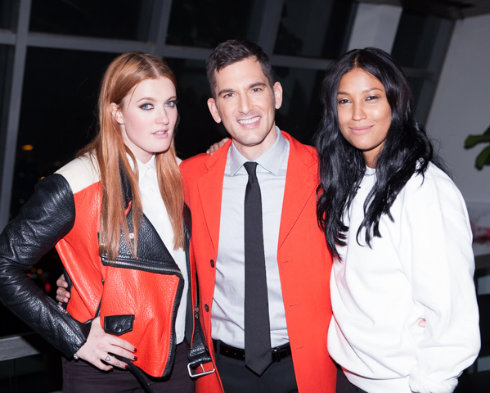 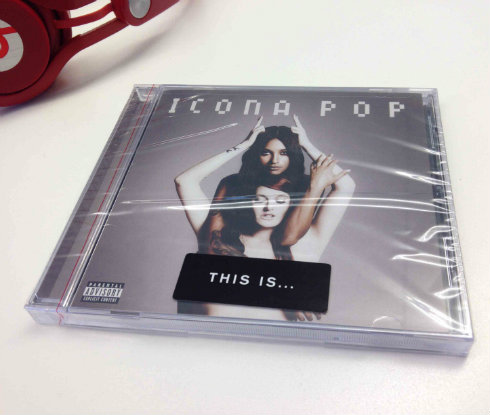 One of the first things I noted when I alerted you about Icona Pop almost three years ago was that the Swedish pop duo has a fine knack for turning bittersweet sentiments into deliciously hooky pop melodies. Now, three years later with a global smash hit at their hands with "I Love It," that powerful point of view continues to drive their unique brand of pop. The group's international debut album, aptly-titled This Is... Icona Pop that was released this week, is solid proof of that. The LP is a non-stop parade of hooky pop gems that will have you tapping, humming and dancing along from start to finish.

I will be chatting with Icona Pop's Caroline Hjelt and Aino Jawo on Thursday evening in New York City when the duo is the special guest of my ARTIST#TALK live interview series with HP and Windows.

In fact, this event marks the two-year anniversary of the series and Icona Pop are the perfect guests to celebrate it with. ARTIST#TALK launched in 2012 with special guest Tinie Tempah and many other big name stars have joined me since, including Flo Rida, Ellie Goulding, Emeli Sande and Swedish House Mafia's Sebastian Ingrosso. It's been a wonderful series that will continue into 2014 with the steadfast support of HP and Windows. It's extra special for me that I get to celebrate the anniversary with Icona Pop (a band I've supported since day one) to discuss an album that I'm popsessed with.

In a way, This Is... Icona Pop feels like a greatest hits compilation as a majority of the LP's tracks have been shared by the band through social media to satisfy the appetite of fans. There are a few newer tracks on the album as well that help round out the listening experience. Most notably, the introspective "Just Another Night" that is the LP's only ballad. Masterfully produced by Benny Blanco and Stargate, Icona Pop has an opportunity to show off their pitch-perfect vocal harmonies that at times invoke memories of early ABBA. Genuinely good and powerful stuff.

I'd love to take some questions for Icona Pop during Thursday's interview. Simply tweet your question to @arjanwrites @hp @windows and include hashtag #ARTISTtalk. I will include as many questions as possible and report back on the group's answers here. If you tweet me a question per instructions above you will also have a chance to win a brand-new HP Envy X2. 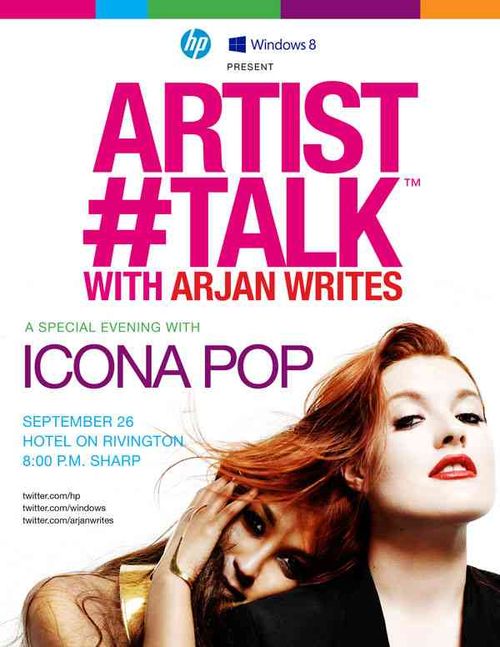