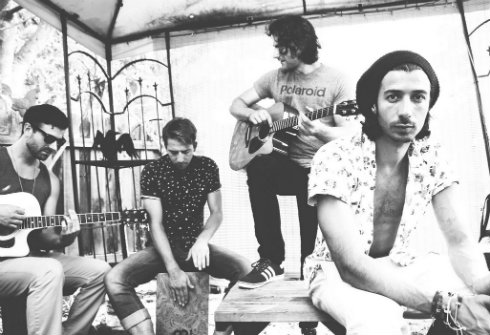 Summer is over and the darker days of fall are upon us, but that doesn't mean we have to shy away from sun-soaked pop tunes that warm up our speakers no matter what time of year it is. The gentlemen of Magic! understand that perfectly. Led by GRAMMY Award winning songwriter and producer Nasri, this Los Angeles based outfit serves up a deliciously hooky brew of Carribean-flavored and reggae-tinged feel-good pop that is the perfect antidote to the banging EDM bombast that is currently ruling the charts. "You can't fight the sunshine," Nasri argues on one of their tracks that sums up their point of view up perfectly.

Pop aficionados among you will certainly be familiar with Nasri's work. As one half of the in-demand writing and production duo The Messengers, Nasri has penned music for everybody from Justin Bieber, Pitbull to Chris Brown and Christina Aguilera. He garnered a GRAMMY Award in the category of "Best R&B Album" for Chris Brown's F.A.M.E. in 2012. One of his most recent productions include "Feel This Moment" by Pitbull and Christina Aguilera.

Magic!'s ready-radio debut single "Rude" is a perfect example of their glistenting pop. Ruled by a Jamaican guitar twang and Nasri's silky smooth vocals, the light-hearted yet poignant tune tells a story about a painful rejection. "I had this picture in my head of a guy asking a father for his marriage blessing and getting rejected," Nasri says in a press release. "It's fun, soulful, easy and you know the hook right away. That's what we want our songs to do."

Magic! happened when Nasri heard collaborator and guitarist Mark Pelli strum a reggae-tinged riff during a writing session in 2012. Something instantly clicked. "I'm a huge fan of The Police, and I always wanted to do my own project that merged reggae, rock, pop, and a little soul for quite some time," Nasri explains.

He adds, "The moment Mark began playing, it felt natural. We had this vision, and it all tied together instantly. We began recording, and the sound was so locked in on every song. That's even where we derived the band name. Everything simply worked like Magic!"

Soon after that initial jam, drummer Alex Tanas and bassist Ben Spivak joined the fold as the quartet entered a Los Angeles studio to record its full-length 2013 debut. There weren't any boundaries or rules. It was all about following that collective muse. "We started recording, and it was so easy," adds Nasri. "We're all from Toronto originally. We know the same streets, and we grew up on the same music. It's the real thing."

"I want everybody to join us on this Magic! adventure," Nasri concludes. "It's a stressful time out there, and people are struggling to find hope in balance. This music is meant to put you in a good mood. We want to bring people together to have a good time. It's not about us. It's about the music. We want you to be a part of that energy and a positive musical world."

(Follow this space for more Magic! updates soon. In the meantime follow the band on Facebook for news. There are some rumblings that the band may change its name to make it easier to find but regardless of the group name the music stands strong and must be heard. Big ups to Julie P. for playing this in her car and turning me on to Magic!)