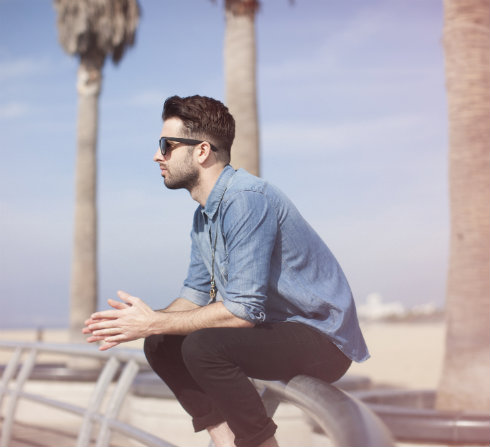 Los Angeles pop crooner Zak Waters biggest claim to fame to date is when French production prodigy Madeon asked him to collaborate vocals to his smash hit "The City." The single turned out to become Madeon's biggest track to date that was a smash hit in countries around Europe and helped Waters to get his name out to a larger audience of music fans.

Prior to the sucess of "The City," Waters first emerged in early 2011 with his diligently crafted pop songs infused with contagious dance hits. In 2011, he began releasing original tracks along with his first solo EP New Normal. The release made the online rounds among music blogs that praised the singer for his unique spin on electro/pop & soul. Last year, we alerted you about his soul-pop stomper "Skinny Dipping In The Deep End."

Besides his singing and songwriting, his production work was being noticed as well that led to his official remixes for major artists, including Adam Lambert, All American Rejects and Foxy Shazam. Most recently, Waters has been in the studio and collaborating with other highly acclaimed and well respected DJs such the nu-disco house duo The Knocks, as well as Benny Benassi, David Guetta, Dillion Francis, Felix Cartal, Hot Mouth and DCUP.

Waters is now gearing up to release his new LP, titled Lip Service, that will be released next month. New track "Penelope" gives up a good clue of the poppy qualities of the record. "Penelope" is happy go lucky pop tune that is ruled by an instantly catchy hook that is a massive earworm. Resistance is futile. Zak Waters will have you tapping along the moment the song hits. I guarantee you. (If you're in Los Angeles, make sure to go see Zak's residency at The Satellite next month. 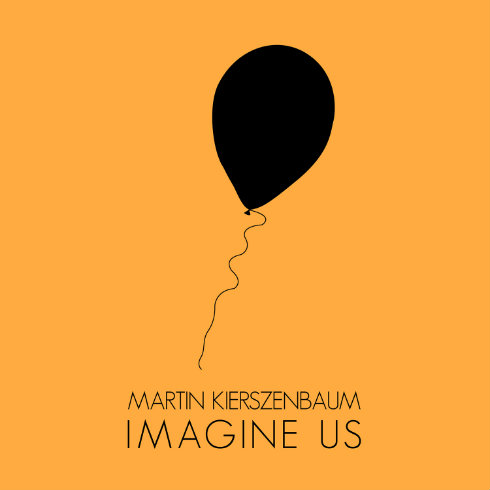 Following the chart success of "Come Back From San Francisco" and "One & Only," the multi-talented Martin Kierszenbaum today unveils his brand-new "Imagine Us," a lush and delightful pop gem that is perfect fare for the final days of summer. "Imagine us like we never thought about it (. . .) We didn't have think about love because it just flowed," Kierszenbaum sings in the song's sun-soaked middle eight that sums up the sentiment of the song perfectly.

Kierszenbaum is most certainly no stranger to pop aficionados among you. To the uninitiated, Kierszenbaum is a GRAMMY nominated songwriter and producer who also heads up Cherrytree Records, the leading pop alternative label that is the home to artists like Feist, Sting, Ellie Goulding, Robyn, Disclosure, Natalia Kills, Jessie Ware and many others.

Many of you will also know Kierszenbaum from his Cherry Cherry Boom Boom production and songwriting moniker that Lady Gaga name checked in the intro of The Fame's "Eh Eh," a song that he co-wrote and produced for the pop superstar (along with other tracks on the classic album that celebrates its fifth anniversary this month).

Like I have written before, what makes Kierszenbaum different from other music industry executives is that he is first and foremost a musician who relates to artists as one of them. He speaks their language and is very hands on when it comes to supporting their craft.

He explained to me previously that he's releasing his own music (independently from Cherrytree Records and his work at Interscope) to satisfy some of his creative urges. "I hadn't written a song for my voice in a while," Kierszenbaum told me earlier. "I'd mostly been writing for others (. . .) But, I love singing and I just felt like singing a couple of my favorite songs. So, I did. And, that led to deciding to write an original one."

Pop music has been a genre that he has been particularly fond of. "I love pop music and I think one of the reasons I love pop is because it's influenced by every genre of music. I just love good music," Kierszenbaum said. "I can get off on a Gamelon piece, hip hop record, sonata or a Merengue song if they're moving. I like to express myself musically in all kinds of ways but one of my favorites is via pop music for sure."

Enjoy "Imagine Us" in the player below while we await patiently what Kierzenbaum cooks up next to further outfit his ever-expanding Cherrytreedom.

Review: Kat Graham Splashes Back Onto the Pop Scene With New Single 'Power' 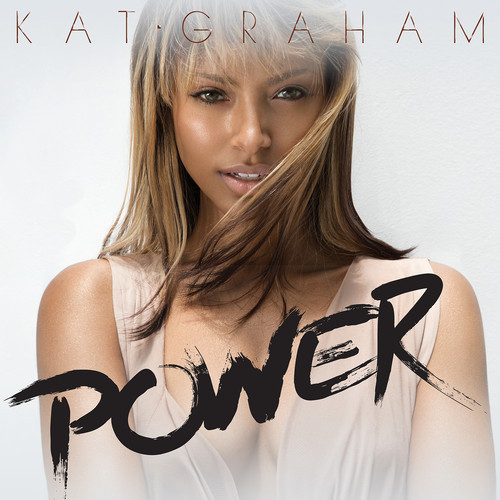 After receiving its formal premiere earlier this summer, Kat Graham's new single "Power" is starting to impact radio and steadily gain more exposure. The song is a potent slice of pop that is dominated by a radio-ready, anthemic chorus, crisp and meticulous production stylings and Graham's empowering lyricism. "I used to be a flower on the wall in the back row/Never was a homecoming queen just a shadow/Now I got a crown 'cause you gave it to me/Cleopatra strong, yeah you found it in me."

In a press release, the actress and singer explains that the song is about giving yourself the ability to accomplish anything. It's a powerful message that Graham not only intended for listeners, but also applies to herself. "The meaning behind this song for me was to express that true power comes from within," Graham explains. "Someone can come into your life and unlock the door to your potential that you may have never known you had. For me, that was love, but it can be anything to anyone.

"From 'Graffiti,' to 'Wanna Say,' to this song - I feel like I've found a space that makes sense for where I am as an artist, a space that fits into who I am as a whole," Graham confides while putting the importance of "Power" in the context of her burgeoning career.

She adds, "Power' is also a gift to my fans and my way of thanking them through artistic expression. It's a song that starts off with with a feeling that you're just one of many, and someone coming along and allowing you to see who you really are."

Graham collaborated with GRAMMY-nominated production duo The Suspex on "Power." They are the teaming of Mitch Allen & Jason Evigan who most recently wrote and produced Demi Lovato's smash hit "Heart Attack." Previously they worked on tracks for The Jonas Brothers, Miley Cyrus, Adam Lambert, Delta Goodrem and many others.

With "Power" bubbling up, it's shaping up to be a busy season for Graham. More new music is on the way and she will soon appear on the 5th season of CW's Vampire Diaries plus she's will be jetting all over the country for radio promote. Make sure to tune in and turn it up. You know you've got the power!

Pop duo Capital Cities is sure having the best week ever. The Los Angeles pop duo is hoovering steady on the top of the charts with their breakout smash "Safe & Sound," and on Sunday the video for the song won an MTV Video Music Awards for Best Special Effects. It's a huge and very well deserved accomplishment for Ryan Merchant and Sebu Simonian that sets the stage for bigger things to come.

The chart success of "Safe & Sound" is supported by the release of a slew of remixes that have been stirring up a storm of plays on SoundCloud. Some of my favorites include remakes by Cash Cash and Story Of The Running World that I blogged about previously. A new favorite is the "Safe & Sound" remix by Ktown Shekki vs Cave Kings that I'm exclusively premiering on ArjanWrites.com today.

In their own words, Ktown Shekki is a new production crew hailing from Koreatown in Los Angeles. Using karaoke rooms as their studio, Casios swung over their shoulders, this loose collective of Los Angeles natives has emerged from a rising underground Ktown electronic scene, mashing up their favorite pop hits with grinding electronic beats and a no holds barred attitude that is reflected in the name: "shekki means "punk" in Korean.

Ktown Shekki worked with Swedish production outfit Cave Kings who burst onto the scene this year with their "Scream & Shout" rework featuring Luciana. Their follow-up was the official remix of Robin Thicke's "Blurred Lines" that hit the charts in Australia and Europe. Cave Kings has now teamed up with KTown Shekki for new remix work.

What I love about this new remix of "Safe & Sound" is that Ktown Shekki vs Cave Kings don't stray too far from the original and kept most of the song's brilliant pop melody intact.Instead of completely pulling it apart, they spice up the track with a grinding electro groove and a few dirty drops that turn "Safe & Sound" into a massive party anthem that EDM fans will salivate over. (If you like this remake also check out this Ktown Shekki vs Cave Kings' remix of Avicii "Wake Me Up.") 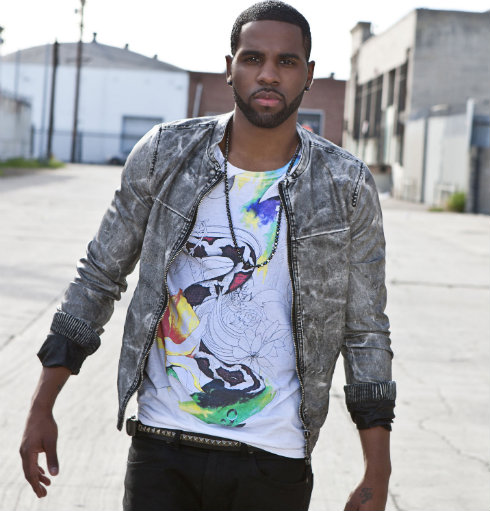 Hot on the heels of his international radio smash "The Other Side," Jason Derulo unveils his much-anticipated follow up single "Marry Me" today that is taken from his forthcoming third studio album Tattoos. "Marry Me" neatly shows off Derulo's vocal chops and poignant songwriting savvy. It's a heartfelt, hook laden and soaring melodic ballad with a proper stomp that drives home the key message of the song. Jason is madly, deeply in love and he wants the entire world to know. "How many girls can make me feel like this/I don't plan to find out/You're the love of my life."

The singer has been dating American Idol winner Jordin Sparks for the past two years and even though he has not confirmed what exactly inspired the lyrics of "Marry Me," it's pretty darn obvious that this is a song about Jordin and their special relationship. I recently saw Jason perform a showcase at the Warner Bros. Records offices in Burbank, CA and during his performance of "It Girl" he asked Jordin to come on stage so he could serenade her. It was such a real and personal moment they shared so candidly with everyone. (Side note: "Marry Me" was co-written and produced by Jonas Jeberg who also produced Jordin Sparks' "One Step At A Time.")

When I interviewed Jason for Beats TV a couple of months ago, I was impressed by his focus, vision and the detail he shared about the brand of pop he wants to share with the world. He's a rising force in pop music and I'm really glad he has opted to follow "The Other Side" with a ballad to show off a different side of him. Part of creating a hit album is telling a compelling and relatable story, and "Marry Me" helps to tell Jason's story for Tattoos. Without going in full detail (yet), I have heard other tracks from Tattoos that are still under wraps, but if you're a pop fan, I'm confident you're going to be very pleasantly surprised by Jason's new record.

Tattoos is a very personal album for Jason Derulo. The title of the new album is inspired by months of rehabilitation during the recording process after suffering a freak accident while preparing for his Future History World Tour in 2012. "Life altering experiences are like tattoos stuck to you for life," he explains. "Some are more painful than others, some may be ugly so we wish we could undo them. Some may be so beautiful that we want to share them with the world. But they're all part of the art that makes you who you are." (Jason Derulo's Tattoos will be released on September 24 via Warner Bros. Records. You can download "Marry Me" on iTunes now.)