Listen to Gallant 'If It Hurts' Produced by Felix Snow [Review] 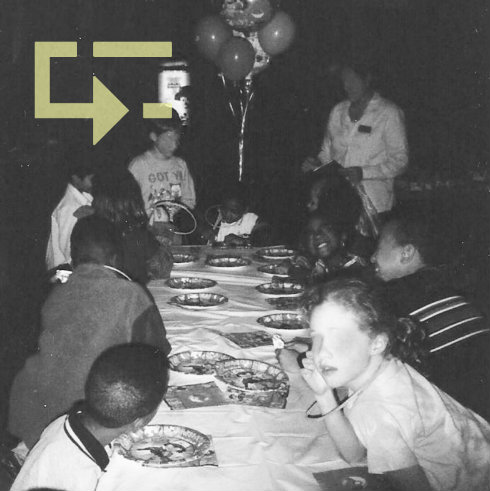 You may remember that I first introduced you to Gallant when I posted his track "Party Girl" back in the summer of 2011 that he collaborated on with none other than William Orbit. Since then, Gallant has partnered with up and coming producer Felix Snow to further tune his sound. Listeners got a first taste of their collaboration when Gallant unveiled his stunning cover of Ke$ha's "Die Young" late last year.

The hotly-tipped New York singer/songwriter now returns with the equally impressive original "If It Hurts" that is rightfully stirring up a storm of interest among music blogs. It's not easy to label Gallant's music and that's exactly the point. "If I Hurts" is a good example of that. It's lush and intensely atmospheric, yet the production packs a visceral urgency that gives the song a powerful emotional boost.

Gallant's soaring, pitch-perfect vocals are drenched in thick layers of Snow's meticulous and well-constructed arrangement. Most notably, "If It Hurts" features a wandering guitar riff that's serves as the song's beating heart and infuses it with a deep sense of melancholia that is truly captivating. Highly recommended. 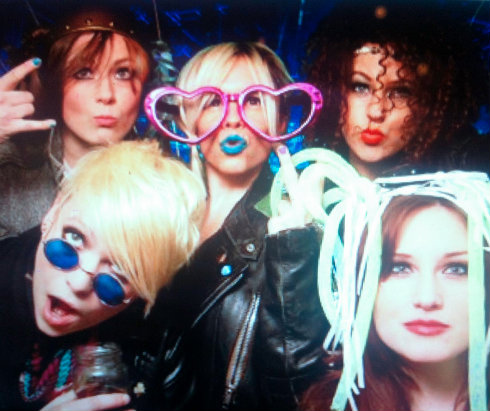 Time to switch gears for a moment and take a quick left turn to uncover something a little different than the pop fare that I usually cover on this blog. Get familiar with something very potent that boasts plenty of pep and a whole lotta attitude. Meet new all-girl group Fake Club who are kicking up a buzz in London with their mighty brew of pop rock. Think of Fake Club as that ruckus girl who is the life of the party as soon as she walks into the room.

Fake Club just unleashed their new single, entitled "Beauty Queen," that shows off the group's deft ability to write an urgent pop-rock banger that is drenched in flaming guitar riffs but is anchored by a powerful pop-oriented chorus. Formally, it's the group's third single, but "Beauty Queen" will be positioned as their first proper single. The group of Aicha, Carmen, Chloe, Rosie and Vicky is co-managed by Guy Chambers (who also manages Robbie Williams), and their music was mastered by Bob Ludwig who previously worked with Nirvana, Foo Fighters and Soundgarden.

It's important for the group to emphasize that they are a band who just happen to be all girls. "We often get referenced to the likes of Suzi Quatro and the Runaways," the group says in a recent interview. "We don’t actually sounds anything like them. It’s just the fact that we’re girls."

The group adds, "That's why we call ourselves Fake Club. It's just about being in a band as a form of expression. You know, being with the people you want to be with and making something good and that you’re proud of and it’s amazing how complicated other people can make that."

Fake Club is clearly not afraid to speak their mind. "Beauty Queen" encapsulates their sound, attitude and definitive point of view perfectly. It's a song that stabs and gouges at the pretty set, the guys and girls who's hair sits perfect while they look down on the freaks, the geeks and the losers who don't fit in. (Click here to download Fake Club "Beauty Queen" on iTunes.) 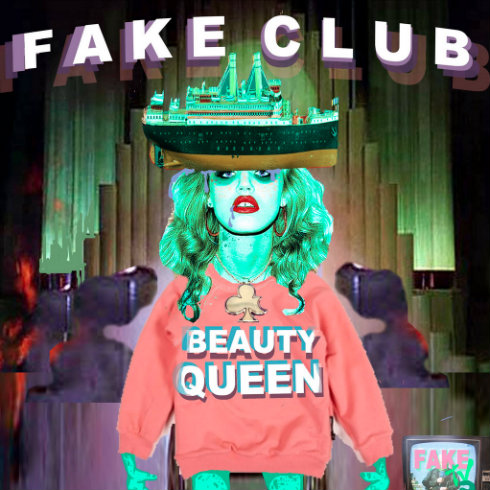 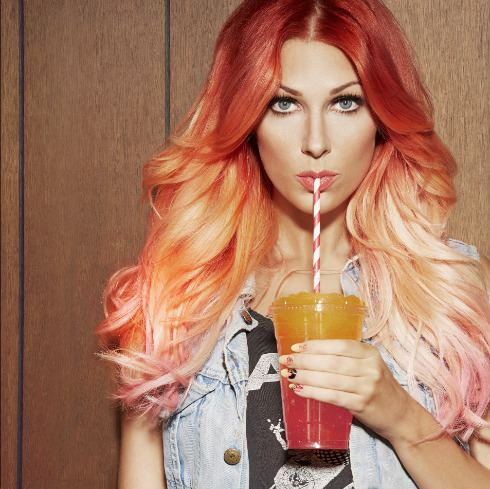 When life throws you a curve ball the best thing to do is to not back down but to roll with it and learn from the experience. Rapidly-rising pop singer/songwriter Bonnie McKee can attest to that. She first popped onto the scene back in 2004 when she released her major label debut album. McKee recorded the LP with noted producer Rob Cavallo, but when her singles failed to chart, things turned sour. "Everyone stopped returning my calls," she explains in a press release, adding that being dropped from the label was a blessing in disguise."

She adds, "I was thrown to the wolves after being the darling at the label. After that I needed to learn humility and earn my stripes. I appreciate it so much more now that I've been in the trenches and had to struggle. Before it was like, 'I got a record deal at 16, that was easy,' like overnight magic, but it doesn't work that way in real life. Now I know how fragile the whole thing is."

After parting ways with Warner's Reprise, McKee took some time off and started writing music to recharge her creative mojo. She was introduced to producer Dr Luke with whom she started to collaborate on crafting songs for others including Britney Spears, Taio Cruz and Ke$ha. They also worked together with Katy Perry on her platinum-selling Teenage Dream. It was a match made in pop heaven that was helped by the fact that Perry and McKee were close friends who met years earlier at a second-hand clothing store in Hollywood (true story!).

After becoming one of pop's premier songwriters, McKee is gearing up to release and peform her own music again. But this time it's on her own terms. This week, she unveiled the brand-new "American Girl" that provides fans a taste of her emerging brand of pop. It's a totally fun and polished pop tune that has global number one written all over it.

Based on McKee's real-life experiences, "American Girl" is a glorious pop confection drenched in colorful '80s nostalgia that is an ode to the pop stars that inspired her. "Some of my earliest memories are of watching Madonna, Michael Jackson and Cyndi Lauper on MTV," she explains. "I loved how the artists of that era were so visual. Seeing what they could do really molded me as a musician. Even now I use a lot of colorful imagery in my writing. Every day I ask myself, ‘What would Prince do?'"

"American Girl" is only the beginning of what McKee has planned for fans. "I’m really looking forward to putting out my own record,” McKee says. “I’ve learned so much over the last nine years and am grateful to have the experience of writing for other artists. I’m also excited to show people what I can do as a performer singing my own songs." 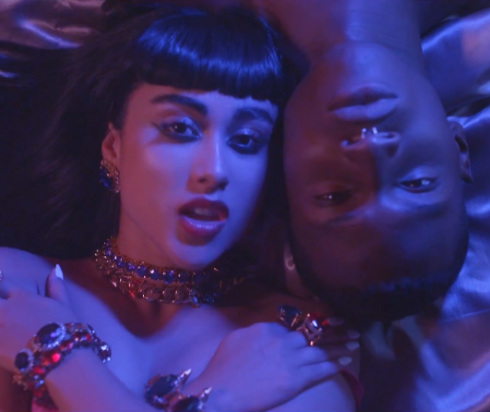 Leave it up to Natalia Kills to stir up the status quo with a stomping new tune and a stylish new video that reminds us exactly why we are such fans of Kills in the first place. The pop provocateur raises the temperature and ups the bar in the freshly unveiled video for "Problem" that was directed by Kills herself.

True to form, Kills combines style with substance in the video and brings the song's hyper-sexual lyrics to life in an explicit yet tasteful manner. The singer is clearly on a mission and teases the object of her desire with lyrics like,"I got your name hanging from my chain/Don’t you wanna claim/My body like a vandal/You got the cure/Underneath your shirt." The video shows footage of Kills performing the song that is interspersed with scenes of her getting comfy in a motel bed, roaming around a convenience store and creating a ruckus in the streets of Los Angeles.

Kills tells Elle.com that the styling of video was inspired by her own experience of living in Los Angeles. "I basically reenact my first few years in Hollywood when I lived in run-down motels and had no money at all," she smiles. "And I used to kill time by doing 'bad stuff' and making out with my boyfriend while looking like a glamorous degenerate. I had no money and caused all kinds of problems, but those days were the best."

Downtown Los Angeles is the perfect backdrop for the gritty girl anthem that gives us a taste of Kills forthcoming new LP, entitled Trouble, that maintains her strong point of view but unveils a grittier sound with early '80s new wave-ish pop influences.

In an interview with Natalia Daily she refers to her new music as "girl interrupted pop." "In almost every song i’m confessing to something bad in my past," she says. "Stalking my ex boyfriend, trying to set fire to the house with us both in it, getting taken away by the police, visiting my dad in jail, leaving home at 15, making out with boys i’d never met before and running away to Paris."

The object of Kills wild affection in the video for "Problem" is model Adonis Bosso. "We first met several years ago in Montreal, and then re-met at a boring but glamorous party in New York, where I was overdressed and horribly bored," Kills remembers. "He was walking down the catwalk at a fashion show, and when we were chatting afterwards, I fell in love with his face! He is beauty."

She adds, "Nothing is more important than when you see someone for the first time, and you get that feeling where you can't move or speak or do anything until you know that person and take a sense of who they are with you. And, yes, he's an excellent kisser." (Natalia Kills "Problem" is available on iTunes now. Also, check out some behind-the-scenes photography of the "Problem" video shoot here.) 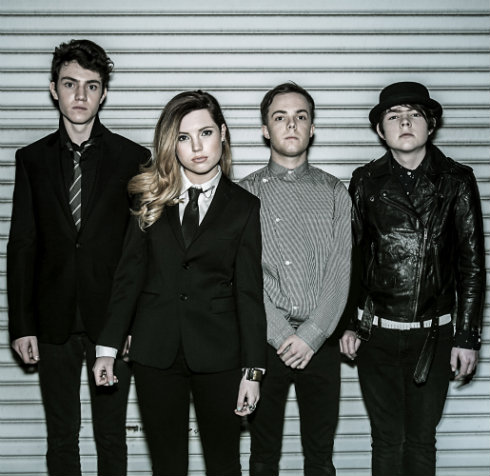 Teen sibling bands have a huge advantage when it comes to forming a band together. Often they grew up together discovering, listening and making music, and teaming up as a group is a logical next step. Just look at popular sibling bands like The Osmonds, The Jacksons, Hanson, The Jonas Brothers and 98 Degrees. Los Angeles-based quartet Echosmith is the next hotly-tipped sibling group who are on course for big things.

Echosmith (formerly Ready Set Go!) is the teaming of Sierota siblings Jamie (19, vocals/guitar), Sydney (15, vocals/keyboard), Noah (17, vocals/bass) and Graham (14, drums). The brothers and sister have been playing together as a band for several years, honing in on their sound and perfecting their collaborative song-writing process.The brood grew up in a musical household, sharing a love for playing instruments and listening to bands as varied as Coldplay, The Smiths, U2, Joy Division and Fleetwood Mac.

"Our dad is a songwriter and producer," says Jamie Sierota in an interview. "We were around music all the time and it came very natural to us to form a band and play together." Sydney adds, "There's definitely a lot of factors to balance in this life. Finding the balance of family and being in a band. But this is what we want to do."

What sets Echosmith apart from many other pop newcomers is not only that they are brothers and sister, but also that they serve up a new sound that is decidedly different than the hard-pounding EDM beats that are ruling the chart. Echosmith's music has been described as Paramore meets Taylor Swift, which is a pretty good way to sum the group's songwriting chops and pristine delivery.

Currently on the Vans Warped tour, Echosmith just unleashed their sun-soaked new single "Cool Kids' that is a soothing (and empowering) anthem for all the misfit kids and total outcasts. "I wish that I could be like the cool kids," Sydney sings. "Because all the cool kids seem like to get it. Nothing in this world can bring them down."

The group is working on their upcoming debut album with producer Mike Elizondo (Tegan And Sara, No Doubt, Maroon 5), who signed them to Warner Bros. with WBR chairman and fellow producer Rob Cavallo. (Download Echosmith's free MP3 summer smapler here.)