« Katy B Premieres New Single 'What Love Is Made Of' [First Listen] | Main | Watch Now: Kylie Minogue is She-Ra [Funny Or Die] » 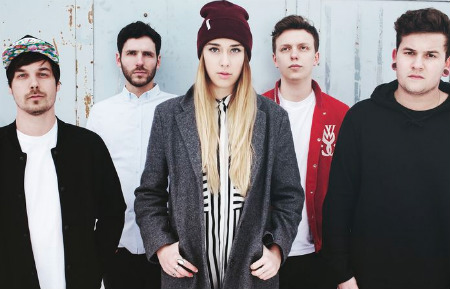 Most often the best discoveries are those that come completely unexpected and Claire is one of delightful new finds. Hailing from Munich, Germany, Claire is the teaming of singer/songwriter Josie-Claire Bürkle, Matthias Hauck, Nepomuk Heller and Florian Kiermaier. The four met by chance when they were all were working in the same studio building to score a track for a film a friend was producing. That recording session sparked a lot more creativity and ideas that ultimately made them decide to join forces as a band.

Claire likes to describe themselves as a "band that finds itself somewhere between synthpop, electronic-pop, half-time beats, hip-hop and indie." The truth is that Claire just makes plain good music that is synth-based and dominated by Bürkle's warming, arresting vocals. It's as if she breathes life into the stark and sleek synth stylings of Claire's music that creates a mesmerizing blend of dance-pop.

Their new single "Games" is a perfect example of that. Driven by a bouncy, '90s-inspired club groove, the song keeps the vibe hopeful and triumphant with its uplifting chorus and resplendent synth riffs. The track is taken from Claire's debut EP "The Empire" that the group released independently late last year, and that also includes tracks like "Pioneers," "Little Brother" and "In Two Minds." It's promising new dance-pop that has us curious for more. (Make sure to 'like' Claire on Facebook for updates.)