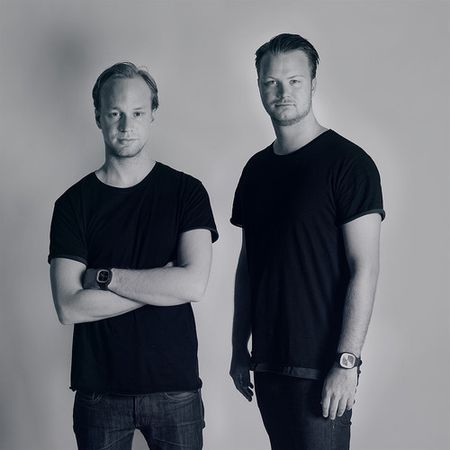 It is no secret that Sweden is the home of some of the greatest pop and dance music on the planet. Artists, singers, songwriters and producers like Robyn, Max Martin, Sebastian Ingrosso, Avicii, Alesso, Icona Pop and many others continue to rule the pop charts and dancefloors everywhere with their big melodic hooks and finely tuned productions. Fortunately for fans, Sweden continues to be a fertile breeding ground for a lot of new dance-pop talent that is about to emerge.

Two newcomers you should keep a steady on are Callaway & Rosto who just released the anthemic house-pop stomper "Rest Of Me that taps into that distinct bittersweet and melancholic sentiment that rules Swedish pop. It's a track that you can easily file next to tunes by Swedish House Mafia and Avicii.

Callaway & Rosta is the partnership of Jacob Lundahl and Alex Rosta who have worked together on Sweden's bustling DJ circuit. Music has always been a big part of their lifes and after playing in rock bands in their early teens they both discovered and fell deeply in love with dance-music. During recent years they have built a strong reputation as reliable party DJs at the bigger clubs and venues around Stockholm. Alex won the Movida/Corona DJ Challenge and ended up as number two in the European finals.

Released through Uniform Beat, their potent "Rest Of Me" features the powerful, rock-edged vocals of Daniel Gidlund who was earlier featured on "Made Of" by Nause and "Feed The Dada" from Dada. (Click here to download Callaway & Rosta "Rest Of Me" on iTunes.)