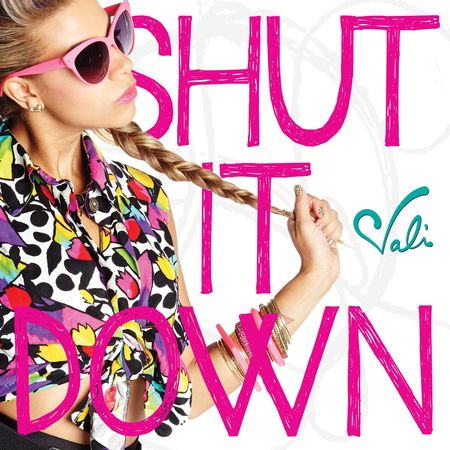 Vali spreads a message of good times, good fun and good music on her new single, titled "Shut It Down," to stir up a party where everyone's invited. "When I wrote [the song] I wanted people to dance, pop bottles, and throw a BBQ," she explains in a press release. "I wanted to write a song that could be played everywhere! The club, the beach, a sweet 16, a grandma’s birthday party, or even a Bar Mitzvah."

Masterfully produced by The Co-Stars, the mightily infectious "Shut It Down" sure has all the makings of a massive dance-pop hit that plays well both on and off the dancefloor. "Shut It Down" is ruled by a crispy, thrusting hip hop groove that leads the song from its punchy verses to a catchy pre-chorus that morphs nicely into a radio-savvy chorus that will have listeners tapping along the moment it hits. Guaranteed.

The song marks another milestone moment in Vali's burgeoning career that all started in New York City's Hells Kitchen neighborhood where she grew up. "There were a lot of gangs, a lot of drugs," she explains. "I was not a kid who got to go out. Music was safe." And fortunately she was surrounded by it. Her mom was a clarinetist and her dad, who lived nearby, a symphony conductor. Vali threw herself into classical piano, tap-dancing, and ballet, shepherded around in an old Buick by her grandfather, himself a professional ballroom dancer.

The young singer and actress entered the famed LaGuardia High School and developed a love for pop and R&B. She even formed her own girl group before heading to Connecticut to pursue a college degree in musical theatre. After graduation, she joined several touring theatre casts until she signed to Rostrum Records to pursue a career in pop.

The release of "Shut It Down" comes along with the premiere of a music video that was directed by Paul Coy Allen (Timabaland, Neon Trees), The video features Vali and a group of friends invading a sleepy desert town. Together they shake things up in all the right ways - just like the song predicted. (Thanks to Carl Chery #BeatsFam for the heads up.)