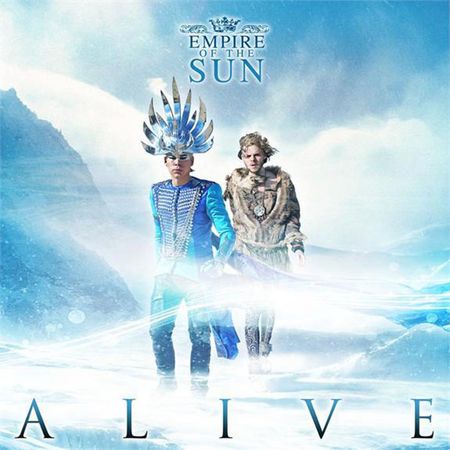 It's been five years since the Australia duo of Nick Littlemore and Luke Steele released Walking On A Dream, their debut album with their Empire of the Sun project. Back than, four-to-floor was only just getting started on American radio waves and George W. was still in the White House.

My how things have changed.

In the five years since their debut release, songs like "Walking On A Dream" and "We Are The People" helped usher in the dance-pop era, paving the way for other successful electro-pop acts like Ellie Goulding, La Roux, and Dragonette. Now that EDM has taken over global airwaves, do our favourite Aussie’s and their sun-drenched sound still stand out as much now as it did than? In short: yes. The lead single "Alive" possesses both familiar elements of the EotS sound—unique vocal harmonies, tasty synth melodies and deep all-encompassing bass—yet, it also pushes their sound in a new direction with more intricate production elements both instrumentally and in terms of arrangement.

The lead vocals of "Alive" sound very much like PNAU, Nick Littlemore’s main project way from EotS. This is in contrast to the original EotS record, which was distinctly flavoured by Luke Steele’s vocals. Furthermore, the elegant sparseness of tracks like "Standing On The Shore" and "Walking On A Dream" have been replaced with thick, interwoven layers of contrasting synths. Even the drums pump fuller and louder on this new EotS release.

However, for me, everything is still glued together by what Empire does best when they’re on their A-Game: a killer hook. Nick Littlemore’s lead guitar line cuts through the wash of synth sound surrounding it, beautifully playing off the chopped lead vocal line and soaring up the F major scale for an endlessly singable lick.

Turn up the volume, pop your windows down, and if you’ve got a Jeep Wrangler, kick off your doors, because this is a track that is meant for a highway drive. Whether you’re cruising solemnly through the outback or jetting down I-75, "Alive" is the perfect track to accompany a summer Sunday drive. (Thanks Steven Siegel for contributing this post. Based in London, Steven is a massive dance music fan and a budding DJ/producer. You reach Steve on Twitter and listen to his own productions on SoundCloud.)