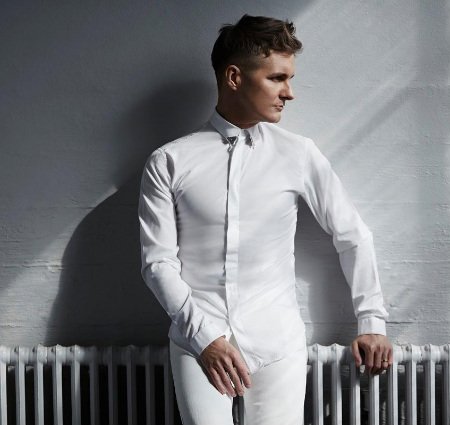 Denmark is not only the home of hundreds of islands, Legoland, Hans Christian Andersen and the Little Mermaid statue in Copenhagen, it's also the breeding ground of some of the finest and most melodic pop ever created. One of the driving forces behind Denmark's thriving pop scene is Thomas Troelsen. He's a singer/songwriter, producer and proud studio owner who is known to most pop aficionados as the lead member of Private who had European chart success back in 2007 with songs like "My Secret Lover" and "We Got Some Breaking Up To Do."

Since the release of their sophomore album, the group has gone through a few changes and returned in the summer of 2012 as a solo project for Troelsen with the poptastic "Everywhere" that featured the spitfire rhymes of rapper Genasis. The track introduced an exciting new sonic direction for Troelsen, exploring the interplay between hip-hop and pop.

Troelsen told me earlier about his interest in combining the though and sweet aspects of the two genres. "I love combining instruments and elements that don't necessarily fit," he told me. "I thrive on intuition when I write music. I always search for new sounds, genres and output to play and experiment with." Private's new "Hell Ain't A Band Place To Be" is another great example of Troelsen's wildy successful sonic experimentations (and should not be confused with the classic AC/DC tune carrying the same title).

Perfectly fusing a hip hop attitude with hooky pop stylings, "Hell Ain't A Bad Place To Be" is dominated by a big, slamming beat and smoldering synths that are instantly captivating. The song's crisp, airtight production perfectly shapes the song's narrative about living in the moment to make life worthwhile because hell is just what you make of it. Rapper Herbie Chrichlow rules the track's spikey verses that burst into a classically poppy and deliciously irresistible chorus that have become a true Troelsen trademark. (Thomas photo by Robert Harper.)