New Music: Listen to All About She 'Bullet' featuring V V Brown [Review] 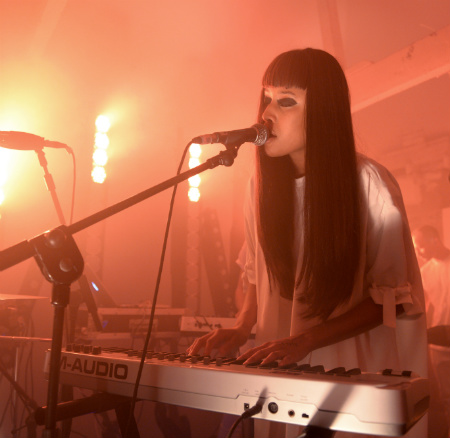 V V Brown during a recent gig in London (source)

The success of acts like Jessie Ware, Rudimental, Disclosure and Duke Dumont is proof that early '90s inspired house music is making a big comeback. It's a retro-styled yet forward-thinking sound that infuses warm, jazzy grooves with pop-savvy melodies and soulful vocals. There's a lot more talent coming out soon that will take advantage of this renewed interest in '90s house. A good example of that is deep house outfit All About She who were recently signed to Tinie Tempah's Disturbing London imprint and released their debut single "2 Hearts" back in March.

All About She now ups the ante and unleashes their fantastic single "Bullet" that features the vocals of none other than V V Brown. It's been a hot minute since we last heard from V V who parted ways with EMI early last year during the promotion of her (unreleased) sophomore LP "Lollipops & Politics." The singer/songwriter made an artistic one-eighty to tap into a more creative vein and take matters in her own hands. Now, almost 18 months later, she has launched her own independent label and is gearing up to release a new album that she has been diligently working on.

Even though it's a collaboration with All About She, "Bullet" gives fans a sneak peak at V V Brown's very exciting new sonic direction. The song jumps right into gear with a pulsing kickdrum and V V's darker vocal timbre that may catch some fans by (pleasant) surprise. She sings, "come as you are you my friend," before a deliciously groovy bassline sweeps the track into mighty powerful and catchy chorus. It's a phenomenal effort that has all the makings of a massive hit and has us very anxious for more new work from V V Brown. (Photo by Karl Is My Unkle)