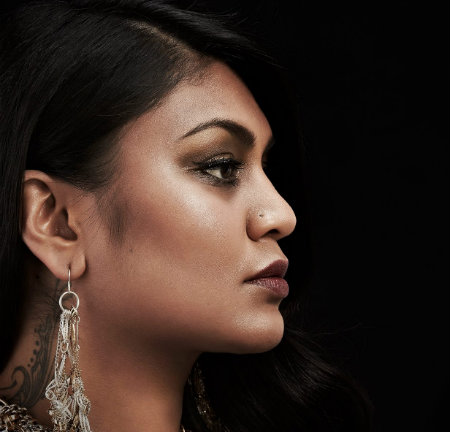 After releasing two albums and several hit singles in New Zealand, soul-pop songstress Aaradhna is now starting to make waves stateside with her powerful new single "Wake Up." It's a playful tune with an empowering message that features her incredible soulful vocals. She wrote the song as a plea to herself to grab life by the horns and make this happen. "I want to make music that I can really say what I want to say," she explains in a press release.

She adds, "At the time [that I wrote 'Wake Up'] I was listening to Amy Winehouse. I used to go to her 'Back to Black album.' I'd repeat it all day because I connected with all her music. The thing I liked about it was that she didn’t care about what other people said, and she really spoke her mind. that’s what I wanted to do."

Aaradhna (who is from Samoan and Indian descent) developed a deep love for pop and soul when she moved to Romania to be on professional basketball team. She discovered artists like Ruth Brown and LaVern Baker, and soaked in old favourites like Otis Redding, Millie Small, Calvin Richardson, Monica, Sam Cooke, Richie Valens, The Capris, Rosie & the Originals & Little Anthony and the Imperials.

It's the blend of old-school soul with melodic pop sensibilities that enables Aaradhna to be most honest with her songwriting, taking cues from the late great Ms. Winehouse.  Writing "Wake Up" in particular was a liberating experience for her that was a catalyst for penning more songs. "I just never spoke my mind," she explains. "If I didn't like something, I still said ‘yes’, even when I should have said something else. Now I say what I want and make sure that I have it that way. I had to grow up, go through all that drama, all the crappy moments to know what I wanted."