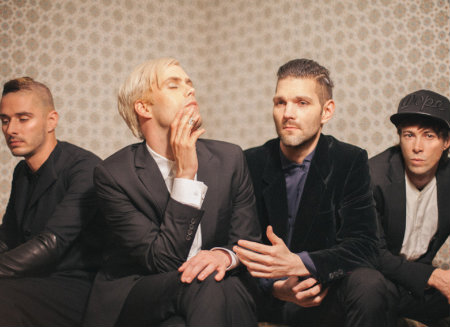 Five years ago, MTV Logo asked me to nominate artists for the "ArjanWrites.com Brink of Fame Award" at the inaugural NewNowNext Awards. I picked young up and comers Lady Gaga, Janelle Monae and Semi Precious Weapons who all went on to achieve big things following that year (little known fact: My nomination of Gaga let to her very first television appearance when she performed "Just Dance" at the telecast together with Space Cowboy).

Semi Precious Weapons ended up winning the "ArjanWrites.com Brink of Fame" award for "Magnetic Baby" with the support of their fans who voted en masse for them to grab the top prize. There was no love lost between old pals Gaga and Semi Precious Weapons who ended up collaborating together and the pop superstar even invited the group to join The Monster Ball World Tour as a special guest for a worldwide 18 month run. The group's profile skyrocketed in this period, leading to featured performances at Lollapalooza, The Isle of Wight festival, headlining the Colours of Ostrava festival and also opening for Ke$ha.

After 3 years on the road, the group of Justin Tranter, Cole Whittle, Dan Crean and Stevy Pyne found themselves in Los Angeles writing with none other than legendary producer Tricky Stewart who produced smash hits for artists like Beyonce ("Single Ladies"), Britney Spears ("Me Against The Music") and Rihanna ("Umbrella"). Semi Precious Weapons' powerful stage presence and songwriting savvy impressed Stewart who signed the foursome to his RedZone/Epic imprint after the group partered ways with Interscope.

The first result of their teaming is "Aviation High" that pushes Semi Precious Weapons' signature glam rock style into an exciting new direction. The masterfully-produced song is a slow-churning powerhouse that blends a thrusting groove, Tranter's brooding vocals and a soaring melodic chorus that's too irresistible to be denied. It's an appropriately epic love song that captures an inescapable melancholy with lyrics like, "Don't wake me up when you're leavin'/Cause I wanna keep on dreamin' of this." Highly recommended. Five out of five stars.