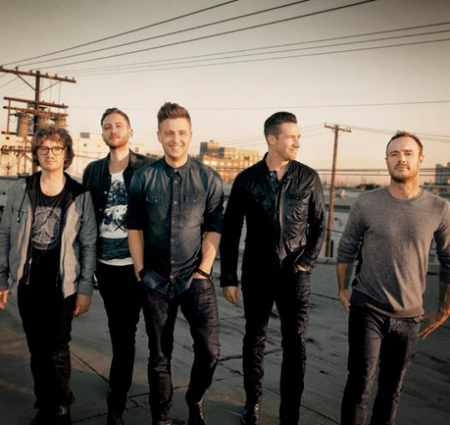 When I last saw OneRepublic's Ryan Tedder he had just won a GRAMMY for his work on Adele's smash album "21" at the 54th GRAMMY Awards in 2012. Back then, he talked about some of his plans for the new year and recording a new OneRepublic album was on top of his list of thing to accomplish. In fact, he noted that the group really felt that the new LP they had just started work on could be their "big break out album."

During this year's GRAMMY Week, I caught up with Tedder at the annual Clive Davis Pre-GRAMMY Gala at the Beverly Hilton. I asked him how the new OneRepublic project was coming along a year after we last talked. He flashed a big smile and was happy to report that he had finished the album just days prior. "I handed in [the final record] 48 hours ago," he said. "I didn't sleep for 3 or 4 days but it was amazing. It's the best thing I've ever been attached to in my life so I hope it goes well. We worked on it off and on for 15 months. We finished it in New Orleans on Monday."

Produced in collobation with Jeff Bhasker, Philippe Zdar and Benny Blanco, OneRepublic's third studio album is titled "Native" and will be released on March 26. The LP includes the group's recent single "Feel Again" and their new EDM-tinged "If I Lose Myself" that is gaining chart momentum on both sides of the Atlantic. "We put it out in Europe first, three weeks ago, and it has been the fastest climbing song in the history of the band. So I'm crossing my fingers," Tedder smiled.

The GRAMMY winner noted that "If I Lose Myself" is "the most pop record on the album" that was directly inspired by Tedder's work with leading-edge EDM producers and his performance at the Coachella Music Festival last year. "We don't have a lot of EDM-flavored stuff on the record," he explains. "But I have been doing a lot of stuff with people like Zedd and Swedish House Mafia that has inspired me. I went to Coachella last year to perform with Sebastian Ingrosso and to watch Swedish House Mafia headline was so inspiring to me. I mean I had goosebumps for like an hour. So I wanted to write one song like that, but in a way that we still sound like a band."

He adds, "Our jobs as musicians is not only to reflect what we think and how we perceive the world, but also to reflect the world. A lot of our fans love EDM right now."

Tedder points out that "Native" spotlights a more raw and authentic vocal delivery. "It's the most intricate singing I've ever done on a record," Tedder explains. "For the first time, I sing the way I sing live or on demos I've recorded for songs I've pitched to other artists, whether that's Adele or Beyonce."

"For some reason, on OneRepublic albums, I've always tried to make my vocals sound neutered, more rock 'n roll or whatever, and now I'm like screw it, I'm just going to sing my ass off," Tedder says. "I'm singing from my gut like I've never done in my life."

Tedder sums up that "Native" is sonically very "organic" and an album "for humans by humans." He explains, "This is one of the albums that I really try to hit people in the gut with and connect with humanity. It's not just about having a good time, but I think these songs have lyrics that people are going to hear and hopefully resonate like nothing else." (Pre-order OneRepublic "Native" on iTunes now. Listen to a full preview of the record below.)