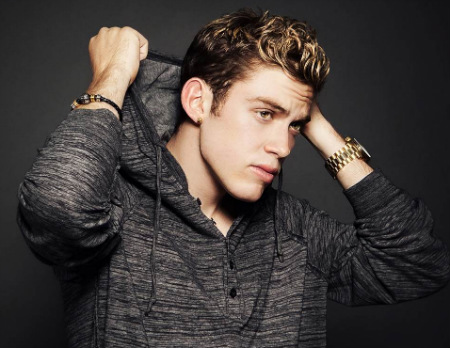 Newcomer Harry Hudson likes to describe his new single, "World Is Gone," as a "mixture of R&B and pop," which is a pretty good (and straightforward) way to sum up the song. The track also packs an infectious hook and a heartfelt sentiment that is sure to make your pop heart beat a little faster.

"World Is Gone" an earnest mid-tempo ballad that does an excellent job introducing this budding new talent to the world. Hudson says in a press release, "[The song] opens the door to what I'm doing. Lyrically, it's an eternal love story. Even though a girl might bail on you, you don't stop chasing her. The underdog does get the girl eventually."

It's a powerful and relatable message that puts the talented crooner in pole position for success. Over the last few months, buzz has steadily been building for Hudson who hails from Los Angeles and has worked feverishly to craft a potent sound of his own. The release of "World Is Gone" is a dream come true for the 19 year-old singer who discovered his love for music at a very young age.

Hudson found music almost as soon as he learned to talk, listening to Michael Jackson records constantly with his mother while growing up in the suburbs of Los Angeles. In high school, music turned into a serious passion as he recorded demos with his friends, even squeezing into a bathroom in order to get the perfect echo on his laptop. After graduating high school, he made a songwriting pilgrimage for two months to Sweden and everything became clear.

Hudson explains, "That's when I realized I couldn't do anything else but music. I slept on the floor in a freezing cold studio for two months, but I began to really discover who I was as an artist. I came back and started going hard." The first result of his hard work is "World Is Gone" that neatly blends a gritty R&B groove with pop-savvy production stylings. Hudson particularly shines in the richly soulful chorus of "World Is Gone" that perfectly captures the essence of song - both lyrically and sonically.