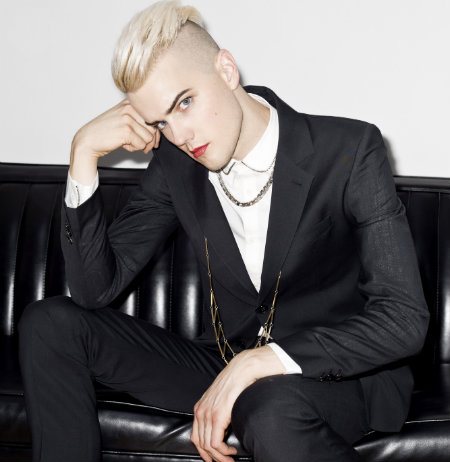 Diamond Rings closed out 2012 strong with his sophomore LP "Free Dimensional" and has been rolling into 2013 strong with a number of high profile live performances and single releases. The Torontosinger/songwriter first garnered critical attention for his debut LP "Special Affections" that fused traditional guitar based songwriting with electronic elements.  After releasing the single “I’m Just Me,” Diamond Rings has been gearing up for the next release off of "Free Dimensional," titled "Runaway Love."

Enter remixer extraordinaire and Edinburgh native Unicorn Kid. After several high profile releases on Ministry of Sound and Ultra Records—along with opening for big name acts like Owl and fellow Scot Calvin Harris—Unicorn Kid’s 8 bit, techy but melodic sound has garnered him critical attention on the blogosphere and from more traditional avenues like BBC Radio 1.

For his remix of Diamond Rings' "Runaway Love," Unicorn Kid takes the original vocals and constructs an entirely new song around the acapella. Opening with sweeping chords and sidechained bass, the Unicorn Kid adds an emotive, but simple two-step synth riff over the top.

Mostly eschewing percussion for added emphasis on harmonic interplay, the Kid finally drops a deep kick at the :47 mark, whereupon the song slowly swells with filtered pads and energetic percussion.  As Diamond Rings repeats, "tell me you need me," the song builds into a drop at 1:16 with a catchy top line that would make Avicii jealous.  The Unicorn Kid’s video-game inspired synths and sweet melodies contrast nicely with the deep timbre of Diamond Rings’ voice, giving the listener an upbeat, catchy remix perfect for locking oneself into the groove.

It's perfect fare to kick your Valentines Day into the groove Look out for Diamond Rings’ new single soon and check out the remix in the player below. (Thanks to Steven Siegel for contributing this post. Based in London, is a massive dance music fan and a budding DJ/producer. You reach Steve and listen to his own productions on SoundCloud.)