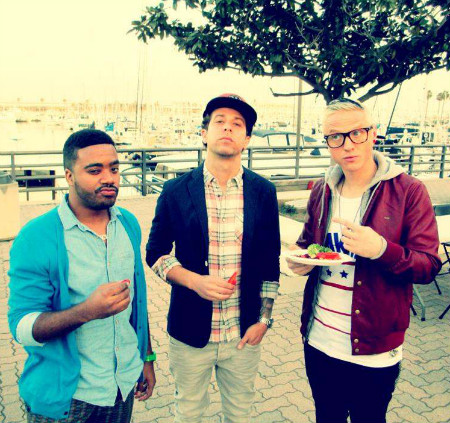 If there's one thing you need to know about newcomers Drop City Yacht Club, it is that they want to make a different kind of pop that is slightly left of center yet still irresistible catchy. Their debut single, titled "Crickets," is a perfect example of that. It's a hot and happening slice of hip pop that blends a radio-ready pop hook with a retro-styled groove and a sunny California attitude that has hit, hit, hit written all over it.

Drop City Yacht Club (formerly The Freshmen) is the teaming of A. Wolf, Kristo and THX who make music for the Playlist Generation that is not confined to one singular genre or sonic aeshtetic. "We're all madmen in our own way," the group explains in a press release. "We don't approach our tracks like typical rap records. We're trying to write songs and break rules. We want to shake some shit up. There aren't any boundaries. We're all from Cali so it was easy to click. It always felt like it was meant to be because we were all on the same page about doing something fresh from day one."

That attitude is also reflected by the group's unusual band name. "Drop City is an old hippie community [in Colorado]," explains A Wolf. "We're super zany, artsy and left of everything going on right now. You don't expect us to do what we do so we felt like that part of the name fit us perfectly. Then, you've got the yacht club or the establishment. It plays on opposing ends of the spectrum. You wouldn't find a yacht club in Drop City. We basically go to yacht clubs and get crazy."

The group got its start in the San Francisco Bay Area when rapper A. Wolf started working with fellow MC Kristo to work on new productions and beats. As they continued collaborating, Kristo wanted to focus on rapping as well, and the duo decided to seek out a producer who shared their vision of "finding a middle ground between The Beastie Boys and The Beach Boys." The group invited soundboard wiz THX (Snoop Dogg, Erykah Badu) to come work with them and the three hit it off instantly.

"Crickets" is Drop City Yacht Club's official debut single that perfectly outlines their genre-mashing musical vision (and sense of humor as demonstrated by lyrics like, "I told her we should kick it, but all I heard was cricket).The group explains, "There's a self-deprecating undertone, and it represents who we are as characters. We take our music seriously, but we have no problem making fun of ourselves either."

They add, "So much music is made for today. We want to be remembered for crafting great songs that were popular rather than just pop songs. If you can be the soundtrack to someone's life, that's the highest props you can get." Expect big things from Drop City Yacht Club. File next to the fresh beats of MKTO and 2AM Club. (Download Drop City Yacht Club "Crickets" on iTunes now.)