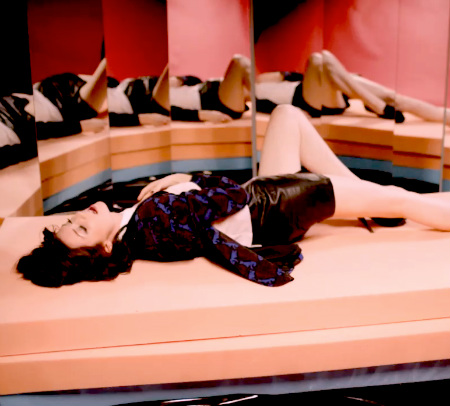 The Good Natured doesn't mask their true pop intentions and has a clear point of view when it comes to their music. "Our songs are all about bringing dark emotions to a pop place, explains vocalist Sarah McIntosh in a press release. "We call it pop with a heart or modern wave pop noir." Together with brother Hamish (bass and synths) and drummer George Hinton, McIntosh makes up a band that initially started as a solo project for Sarah, but has now morphed into a proper band with a compelling vision and roadmap.

Hot on the heels of their singles "Skeleton," "Wolves" and "Video Voyeur," The Good Natured have spent much of 2012 working hard on their debut album. The first fruit from their labor of love is their forthcoming new single "5-HT" that the group concocted with none other than Richard X.

The result of their teaming with the legendary hitmaker is a grungy, '90s rave-tinged pop alternative record that combines brooding drum and bass stylings with a proper dose of melody. The song's gritty undertones amplify McIntosh's love-obsessed lyrics that compare her unbridled desire to craving a shot of numbing serotonin to the brain. She confesses, "I fall deep/You kill the pain/My opiate/5-HT/Rush to the brain/My opiate." (Note: Serotonin is also known as 5-hydroxytryptamin aka "5-HT.")

For their debut album (due for release summer 2013)  The Good Natured runs the full pop gamut. A press release pumps up anticipation and states that the record will "channel their influences both from the past and the present," and draws "inspiration from sex, love and fantasy" that "they twist through their prism, refracting them into fascinating imagery."

It reflects the band's ongoing fascination with the bleaker aspects of human emotion that they fuse with massive, joyful sky-scraping choruses - a juxtaposition at the root of most great pop moments. As if creating their debut album wasn't time-consuming enough, the band also made time earlier this year to work with electro-pop legend Vince Clark from Depeche Mode. Together they collaborated on a new song, the throbbing ‘Ghost Train’, which was included on an exclusive mix they made for BBC 6 Music. (The Good Natured "5-HT" will be released in the U.K. early next year.)