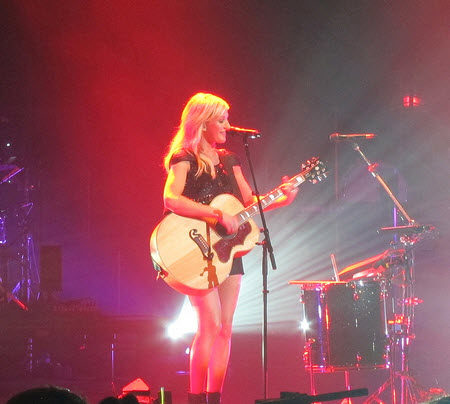 It seems like every hot act of the moment is playing at London’s famed O2 Brixton Academy.  I covered Labrinth's excellent show at the venue a few months back and more recently, Two Door Cinema Club recorded a live LP there as part of the special release edition of their second album "Beacon." The truth is, nearly every great British artist from the past five years has headlined Brixton Academy at some point on his or her rise to greatness.

Thus, into the fray struts Ellie Goulding, the 25-year-old native of Northern England.  Readers of this blog will know that Arjan has covered Goudling’s rise from the very beginning.  Furthermore, Arjan has had a chance to sit down with the songstress herself multiple times over the years, including an excellent ARTIST#TALK from this past summer.  Far from her days recording in producer Starsmith’s university flat, Goulding is now a trans-Atlantic star, with her single “Lights” hitting #1 in the U.S. in a record climb to the top.

However, while she did drop a particular forceful addition of “Lights” mid-set tonight, most of Goulding’s Brixton material came from her recent second LP "Halcyon."  With such intricate production laced all over the record, I was pleased to find that much of the material gained new texture and sonic intricacy on stage. Goulding opened with several cuts from the new album, including "Figure 8," "Don’t Say A Word" and "Halcyon."  Of the set-lists first six songs, only the Starsmith produced "Salt Skin" snuck in from her first album.

The great thing about Ellie’s music is that when you strip away all the intricate electronic production, the core of her songs revolve around simple piano and acoustic guitar.  Indeed, Ellie treated her audience to several acoustic renditions throughout the night.  "I Know You Care" and "Guns and Horses" provided a nice emotional break mid-set, while her cover of Elton John’s "Your Song" inspired the sold out arena into a three minute sing-a-long during the encore.

It wasn’t all down-tempo though.  After a tricky key change from "Only You" into "Under The Sheets," Ellie played her most recent successful single, "Anything Could Happen."  While still a relatively fresh cut in the States, the London crowd immediately squealed with joy upon hearing the catchy intro riff with Goulding’s chopped vocals.  The Herefordshire native also switched it up a bit at the end with a dubstep outro on "Lights" that highlighted the influence this particular genre has had on her over the past year or so.

For me, the absolute highlight of the night was actually her closing song of the evening, "Starry Eyed."  Of any song from her first two albums, this one transitions most exquisitely from studio to stage.  The additional piano trills (reminiscent of the infamous Russ Chimes remix) added during tonight’s live performance helped quite a bit as well.

I remember seeing Goudling’s first few releases on New York indie Neon Gold back in the day and it’s truly amazing to see how far she’s come.  After tonight’s sold out show, she too can now add a Brixton Academy sell out to her CV.  Is Wembley next? (Ellie Goulding photo via KarmaChang on Flickr.)

(Note from Arjan: I'm in Shanghai, China on a special assignment for the next few days with limited access to the web and social media. ArjanWrites.com pal and pop-loving, in-house dance music expertSteven Siegel will be filling in with a couple of posts this week to get you the latest about what's hot and happening on the London scene. Updates from China soon too.)