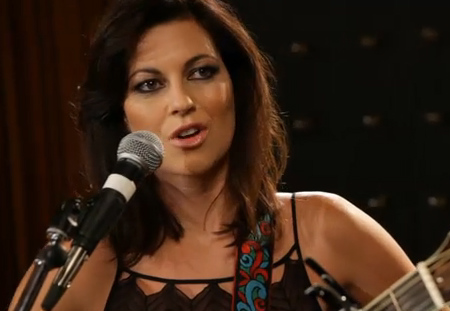 Tristan Prettyman's moving new album is the result of a long and unexpected journey following the success of her 2008 LP "Hello." After wrapping two years of touring in support of the record, the California songstress took an extended break during which she traveled the globe, had surgery to remove polyps on her vocal cords, got engaged to her long-term boyfriend, dealt with the pain of his ending the engagement, and eventually questioned whether she even wanted to be a musician at all.

In an exclusive interview with Walmart Soundcheck (with a few questions from yours truly), Prettyman explains that in the end her fans were instrumental in her decision to continue making music and performing music. "I have a wonderful support system at home," she tells Soundcheck. "But my fans just the way that they have been with me through this journey, coming back to music and recording this album, I love them. It's because of them everything is possible again basically."

Together with producer Greg Wells (Adele, Katy Perry), Prettyman sat down to write, record and chronicle the intensely personal experiences of the last few years on her new album "Cedar + Gold." The album's storytelling finds Prettyman sifting through the wreckage of her relationship and emerging stronger on the other side. "I started writing songs from a place that was so deep and honest, where I didn't hold anything back," she explains. "It felt so good. I was like, ‘This is what music is about — being able to release what is trapped inside of you.’

Prettyman refers to recording and performing the LP as the last bit of healing that she does together with her fans. "It is a journey. Every night is different on stage," she explains. "I like demonstrating that I'm human. Sometimes I freak out and sometimes I choke up on stage and sometimes I get shy. I'm not a perfect person all the time and I think it allows fans to feel comfortable in themselves. We're not perfect, but that's perfect."

Tune in to Walmart Soundcheck to see Tristan Prettyman perform songs from her new album plus more video interview footage from this remarkably gifted singer/songwriter. To celebrate the release of "Cedar + Gold," fans can also download a free MP3 of Prettyman's "Quit You."