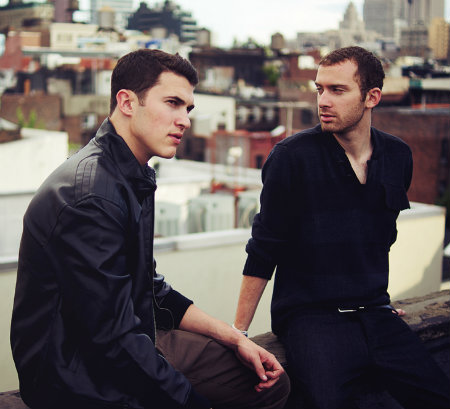 Following the success of their independent mixtape EP "Under The Influence," hotly-tipped Boston pop duo Timeflies today unveils their new EP, entitled "One Night." The group is known for covering other people's songs on YouTube, but on this new EP they present their own songwriting including their new single "One Night." It's a sweet little tastemaker for the group's genre-mashing brand of pop that combines pop, hip hop and dance. "One Night" is a great example of the duo's pop sensibilities with its delicate intro that slowly builds and bursts into a hook-laden, raving chorus.

Timeflies is the duo of producer Rex and vocalist Cal Shapiro who first started working together while attending college at at Tufts University right outside of Boston. "Rex started a six piece funk band," Shapiro explains in an interview. "He heard me freestyling at a party and was like, “Yo, come sing with my funk band. So I came down, we did a rehearsal, and next thing we know we were playing gigs and won battle of the bands and were opening for Asher Roth and Ludacris."

An early inspiration of their popular Timeflies Tuesday was their play with beats, samples and surprise rhymes during college parties. "Rex would write some stuff for me," Call explains. "We recorded some 'joke tracks' and then when he was DJ'ing parties, he would slip them in in the middle of really hot songs, then we would see if the room was like 'What the f*ck?' or if they were dancing."

The group adds that sampling other people's songs has been a good way to kickstart their creativity. "You find something and work on it and when you make it better than the original then you’re like oh thats phat," Rex concludes. But their play with other people's tracks has also inspired many of their own ideas and melodies for new original music. (Download Timeflies "One Night" on iTunes.)