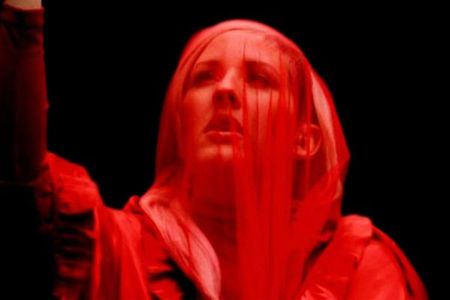 One of the things that immediately struck me when I first watched Ellie Goulding's new video for "Figure 8" is how the singer has completely transformed herself over the last couple of years - evolving from a British chart darling into a bonafide global superstar. Perfectly combining style with substance, the visually-stunning video for "Figure 8" is one for the big time that shows a confident singer and fashionista who looks nothing like the sweet debutante we saw in the video for "Starry Eyed."

"Figure 8" is one of the most emotional and sonically provocative songs on Goulding's "Halcyon" LP. Capturing a period of profound change and transition in Goulding's life, the album captures a feeling of loneliness, and describes a journey of heartache and towards hope that drives each and every song on the record.

"Figure 8" tells part of that bigger story on Halcyon." The song seems to be ripped straight from Goulding's personal experiences when she sings, "I chased your love around a figure 8. I need you more than I can take. You promise forever and a day, and then you take it all away." Lyrically, she doesn't step away from the painful experience without painting a silver lining and giving listeners an important piece of advice, "Lovers hold on to everything and lovers hold on to anything."

The gritty, slighty dark and perfectly-styled video for "Figure 8" intensifies the raw emotion that drives the song. The video pictures Goulding twisting and turning in bed trying to make sense of a nightmare situation. Those scenes are interspersed with footage of Goulding dressed in a flaming red, flowing gown and veil that likely is a metaphor for the bad dream that continues to haunt her. It's a brutally honest and brave visualization of a song that is very personal to Goulding but is delivered in a way that will resonate with many, many others. (Click here to download Ellie Goulding "Figure 8" on iTunes.)

Sirah Premieres Video for New Single 'Up & Down" [First Look] 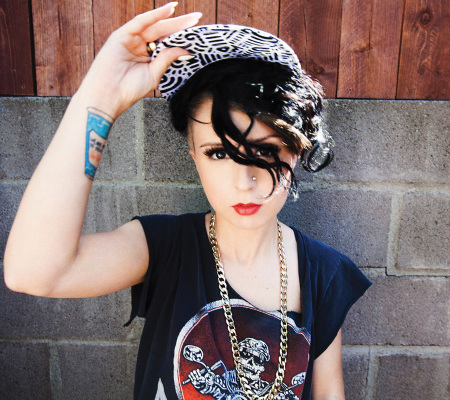 After stirring up a storm on the Los Angeles music scene over the past few years, newcomer Sirah is turning it up a few notches with the release of her new video "Up & Down" that should get her noticed far beyond Cali borders. "Up & Down" is a wildly unorthodox mash of pop, hip hop and dubstep, and the freshly-released video that goes along with it shows off Sirah's no holds barred attitude that proudly exposes her flaming punk-rock roots.

Dance aficionados among you will most certainly know Sirah from her collaborations with Skrillex. She's featured on two of his tracks, including "Bangarang" and "Kyoto." She explains in a recent interview that they shared a downtown Los Angeles artist loft and worked on a bunch of tracks before "Bangarang." "Skrillex has been one of my best friends for probably like, six years,” she explains.

Sirah explains that one night Skrillex called while he was on tour and asked her to record vocals for a track he was working on. "He was like, 'Hey can you record 16 bars and send it to me,'" she recalls. "I was like, ‘Do you want me to go to me studio?’ He was like, ‘No, no, no. Do it right now." That very first recording ultimately made it onto the final production of the "Bangarang" EP.

What makes Sirah stand out from many others is that she's a naturally gifted writer who pens songs, rhymes, hooks and toplines virtually non-stop. "It's obscene," she smiles. "Sometimes it looks like I have a death wish as I attempt to record voice notes while driving cause a melody pops into my head. When I work with my producer it's seemingly flawless. We'll finish two to four songs in a session, write and record them."

The mightily talented Sirah was recently signed to Atlantic/Pulse Records and is currently working on her big label debut. In the meantime, there's plenty of hot and happening Sirah music to be very excited about, including her mixtape "C.U.L.T. Too Young Too Die" that you can download for free at on her web site. 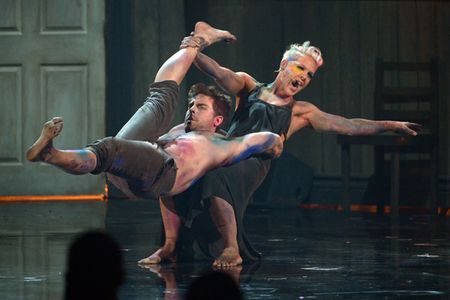 Man Controls ‘Call Me Maybe’ With His Actual Heart

Was Nikci Minaj Bored by Her Own Performance? 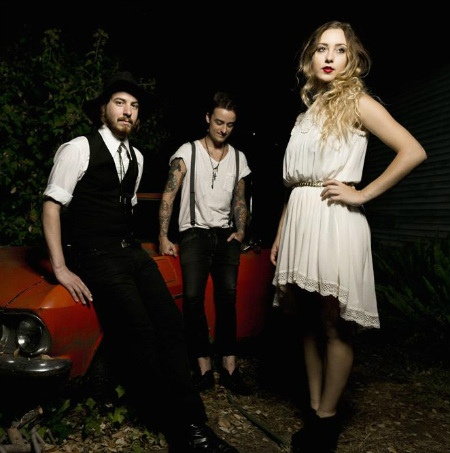 Let me just throw this out there for the readers of ArjanwWites.com: my favorite pastime is driving and jamming. There's a certain buzz you get from cranking up your favorite tunes and flying down the highway. Living in London now, I don't get the benefit of that feeling anymore. That being said, Los Angeles based trio DWNTWN - comprised of Jamie Leffler, Robet Cepeda, and Jerrod Bettis - recently released their fresh EP "The Red Room" and all I can think of when I hear the opulent soundscapes of electro-pop cascading through this release is how perfect it would be for a Sunday night sunset drive down Highway 1.

"The Red Room"opens with "See My Eyes," a perfect opening salvo for the group. The poppy, upper register synthesized riff is atmospheric and warm, inviting the listener into a sea of electro-pop sound. After a verse of extensive vocal manipulation that would make Ellie Goulding or Dev proud, DWNTWN drop a chorus full of steamy '80s synthesizers on us. Your mind's eye probably won’t be too far from the beaches of Santa Monica at this point.

Another highlight for me on this 4 song EP is the downtempo "Stood Me Up." The track’s melancholy synth opening and groovy, Juno-106 bass line instantly calls to mind the ethos of Drive, the Ryan Gosling vehicle with the French House inspired-soundtrack.  As Jamie Leffler sings like a whisper through verse, plucked guitars with stadium-rock delays permeate through the mix.

The simplicity of the arrangement really comes through in the chorus though, where a rush of escalating saw-tooth synth waves and sidechained rolling bass create a rolling groove that would be impossible not to nod your head to.

Rounded out by two up-tempo tracks,  "Look the Other Way" and "Transition," "The Red Room" is a fine debut effort from the self-described “dreamy synth pop” group.  In today’s over-crowded nu-disco and electro-pop marketplace, DWNTWN are certainly impressive and their composition, production and instrumental talents are evident throughout the work. Download DWNTWN "The Red Room" on iTunes now.  (Review written by London-based guest blogger Steve Siegel. Siegel is a massive dance music fan and a budding DJ/producer. You reach Steve and listen to his own productions on SoundCloud.)

When Justin Timberlake decided to join Myspace's new leadership team, his core vision was to help build a social network that would help artists connect to fans and other artists in innovative new ways. That's ultimately what made Myspace such a powerful social platform when it first launched in 2003. During a private meeting on Thursday, Timberlake explained, "Imagine if David Bowie, Andy Warhol and Stanley Kubrick or somebody like that would all get in a room? What would happen? That's what the new Myspace intends to do in a forward-thinking way."

A small group of reporters and writers was invited to Beverly Hills' swanky SLS hotel on Thursday to meet with new Myspace owners Tim and Chris Vanderhook and Justin Timberlake to talk about their ideas and plans for the social network that is currently in beta phase. Myspace developers and product managers were on hand as well to provide attendees a personal demo of the site.

After a general introduction to the new Myspace and creating my own user account to toy around with the site, a select group of writers was ushered into a private meeting room for a 30 minute sit-down with MySpace's top executives. The room was set up with comfy white leather couches that there were positioned in a circle to invoke an intimate interview setting.

Brothers Tim and Chris Vanderhook first entered the room, followed by Justin Timberlake (and pals Kenna and Scott Vener) all excited and ready to talk Myspace. Timberlake dressed business casual for the occasion wearing a fitted black suit, dark shirt and no tie. Before kicking off the sit-down, the Vanderhooks and Timberlake all went around the room to introduce themselves before taking a seat and answer questions. I stood up when Timberlake shook my hand, but he smiled and suggested, "No, no, please don't stand up." Such a gentleman.

One of the things that struck me throughout the meeting is how truly involved Timberlake is in the new Myspace initiative. He's not just a celebrity face of it to help market his investment. Timberlake was articulate, took time to answer questions and was very engaged with everybody in the room. There were moments that when the Vanderhooks were answering a part of a question that Timberlake would look around and made eye contact with all in the room, nodding and giving everyone non-verbal personal attention. (Quite frankly, it was hard to suppress the screaming fanboy inside of me who wanted to cheer "I'm sitting seven feet from JUSTIN TIMBERLAKE and he just shook my hand!" Amazing.)

Timberlake explained that each artist can create an artist profile that will list their "Top 8" fan listing. He told me that he believes this is a stand out feature that will help artists to get to know their fans. The pop icon told the group that he likes using Twitter to hear from fans but that the amount of messages he receives is overwhelming. The "Top 8" fan feature will be a powerful new addition that can give artists a lot of information, plus it enables artists to engage with fans in more engaging and meaningful ways.

Timberlake gave the example that Taylor Swift may want to interact differently with her fans than The Roots, and the new Myspace will be able to accommodate that through a new set of tools.

New Timberlake music was brought up in the meeting as well (uh-oh!). The pop icon stayed on message and repeated what he has said before in interviews. "When I'm ready to talk about new music, I will say it in the biggest possible way." And that's that for now.