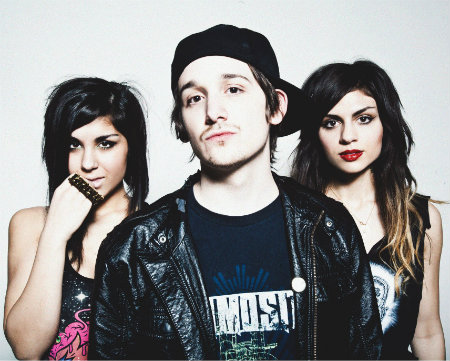 Krewella has found a way to innovatively combine gritty dubstep riffs with pop-savvy melodic hooks that have the potential to reach the masses. In fact, some may even argue that Krewella at its creative core is a pop band with a deep love for the dance floor. Their brand-new single "Come & Get It" is a perfect example of that. The track is driven by a adrenaline-fueled drum 'n bass groove that is mashed up with the occasional dubstub wobble, candy-coated pop vocals and an infectious hook that pop hits are made of.

To the uninitiated, Krewella is the Chicago teaming of Jahan, Yasmine and Rainman that I first alerted you about in 2009. While the group's dubstep-influenced stompers are getting most of the attention, it's important for Krewella to point out that they are by no means solely a dubstep act. "We get pigeonholed into it a lot, but only one of the tracks on our EP is actually dubstep," says Kris Trindl aka Rainman, Krewella's savvy beatmaker."People like to put us in a box, but we just like good music. If it’s between 100BPM to 170 BPM we'll figure out a way to make it work and have a good time with it," the producer and DJ says in a press release. "We just make the music that we love."

"Come & Get It" is taken from Krewella's forthcoming new remix EP, entitled "Play Harder." The eight-song EP features a selection of banger remixes of two of their most popular tracks—"Alive" and "Killin’ It." The EP will be released digitally on December 10. In the meantime, make sure to grab Krewella's new "Come & Get It" right here.