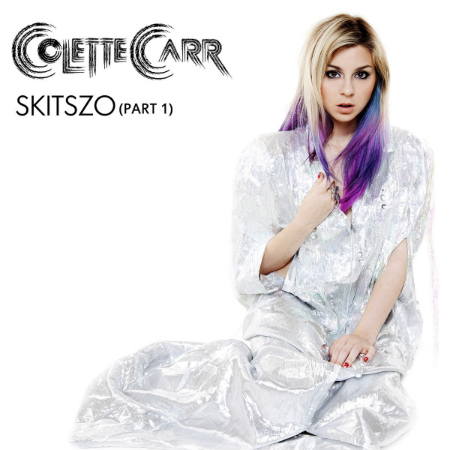 It's nearly impossible to put a label on Colette Carr's music, but if there's one word to sum up her unique point of view it's that she's fearless. From jumping on stage to freestyle with The Game to her bold sense of fashion, and from wildly spreading positivity on Twitter to her big, banging pop beats, Carr likes to expresses herself in many different ways and refuses to let anybody else define her. She's a musical chameleon who can spit a rhyme, own a dance beat, belt out a lullaby and deliver a catchy pop hook. There's a good reason she named her debut LP "Skitszo" as the entire project is a schizophrenic mash of exciting new pop.

In a press release, Carr candidly explains that "Skitszo" is also a tribute to her uncle who suffered from schizophrenia. "He showed me what true and pure creativity was before he passed away two years ago," she confides. "He was so honest and loving- free and trapped at the same time. I am forever fascinated by his beauty."

The release of Carr's "Skitszo" EP this week is the first in series of EPs that combined will make up her debut LP. The album’s songs will go on sale as fast as they’re finished via four digital EP installments to be released in two-month increments. It's an innovative way to share new music while in the middle of the recording process that also satisfies fans' insatiable appetite for new material.

Part 1 of Skitszo" is a proper introduction to the genre-mashing and no holds barred world of Colette Carr that balances between sweet and crunchy, combining slamming hip hop beats with clever pop hooks. Lead single on "Skitszo" is the hip hop stomper "Like I Got A Gun" that Carr first released this summer.

Produced by Martin "Cherry Cherry Boom Boom" Kierszenbaum, the EP version of "Like I Got A Gun" is a slight remake of the original that includes rapper YG. In many ways, "Like I Got A Gun" perfectly demonstrates Carr's wide range of pop, starting out as a gentle piano serenade that segues into a banging hip hop beat infused with Carr's spit and shine. "I keep it moving like a centipede," she proclaims, setting the stage for even bigger things to come.

Carr also closely collaborated with British electro-pop artist Frankmusik on tracks for her "Skitszo" project including "We Do It (Primo)" and their duet "No ID" that were previously released as singles. Included on "Skitszo" is the hyper catchy "Killswitch" that has Frank's crafty hands all over it with its stuttering synths and melodic loops. "All tangled up, no strings attached," Carr sings on the song, once again perfectly outlining her musical point of view in not-so-subtle terms.

"Skitszo" also features the Frankmusik-produced "F16," an anthemic pop tune that was a crowd favorite during her Cherrytree Pop Alternative Tour performance in Canada last year.

Frankmusik also helped craft "Delusional" a peppy, electro-edged tune that is ruled by raving synths and Carr's candy-coated pop vocals. The song first appeared a couple of years ago, but fits nicely in this collection of new songs. Stay tuned for the second part of "Skitzo" on January 8 that will surely show us a few others sides of Carr and her schizo-ways. (Colette Carr "Skitszo" Part 1 is available on iTunes now.)