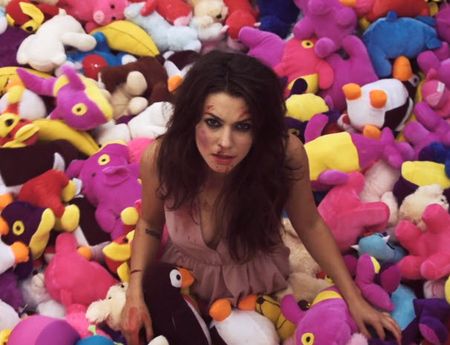 Meg Myers is a woman under siege in the genius music video for her new single "Curbstomp" that was released this week. She is attacked by an army of plush toys who come at her from every single direction. It's a perfect metaphor for a song that balances extreme emotions and underlines that Myers doesn't shy away from a little danger to get her way. "I'm addicted to fire," she sings, indicating that there is much more to her than sweet innocence.

Myers has been compared to the early work of singer/songwriters like Alanis Morissette. In a recent interview, Myers explains how she has been influenced by a '90s sound. "That’s what I grew up with. I was like the really emotional teenager, which we all are you know," she smiles. "I looked up to my brother a lot, he was a couple years older than me. When I was 13 he was really into Nirvana and Alice and Chains and Eric Clapton and Jimi Hendrix. He was the one that inspired me.  He was drawn to that melancholy music so I got drawn into that as well."

She is quick to add though that '90s music is just part of her story and not all of it. "I get compared to a lot of '90s female artists and of course I love that because quite a few 90’s female artists were actually good. But that’s not all it is, obviously," she explains. "There’s something new to what I do. I’m just playing and I’m not going for a specific type of sound. I’m kind of all over the place. I don’t know."

Produced by Dr Rosen Rosen, "Curbstomp" is taken from her forthcoming new EP "Daughter In The Choir" (a title that Meg refers to on "Curbstomp"). You can download the track now totally guilt-free on her website.