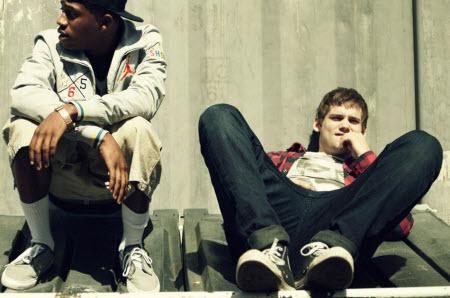 We first introduced you to MKTO (formerly Role Models) back in May after the group of singer/songwriter Tony Oller and rapper/lyricist Malcolm David Kelley were just signed to a major record deal with Columbia Records. Since then, the duo has been working with master hitmakers Evan "Kidd" Bogart and Emanuel Kiriakou on music for their forthcoming debut album that has insiders buzzing.

It looks like most of the work on that record has wrapped and they're about to unleash their debut single, entitled "#ThankYou," in the next few weeks. The duo just released a quick video formally introducing themselves as MKTO to the world, and it's pretty safe to assume that the instrumental track that that's used in the video may be a reference to their first single (and which sure sounds very promising).

Tony Oller (which some of you may recognize from his stint on The Disney Channel) also briefly talks in the video about the MKTO sound, a potent brew of pop that he describes as "what we want to hear." He continues, "I want to hear a record that has a pop feel,  has a soul feel, has rapping on it, has R&B. So when you listen to it there is not one part of it you don't understand."

Tony and Malcolm also show off some early logo treatments for MKTO which appropriately stands for Misfit Kids & Total Outcasts. I can't quite put my finger on it, but I have a really good feeling about these two and what they're about to deliver. Watch this space for updates.