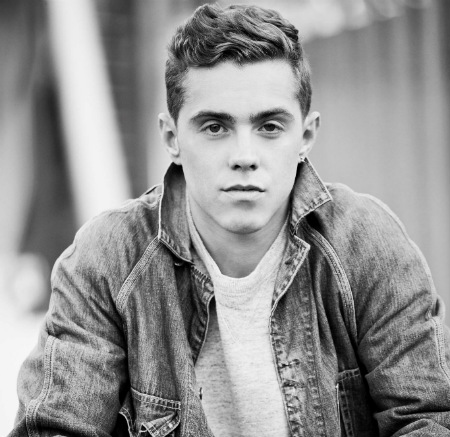 After rising to fame on college campuses around the country and stirring up a firestorm online with his cheeky rap romp "I Hate College," fresh-faced Massachusetts native Sammy Adams is now slowly but surely gaining momentum on the mainstream pop scene as well. His brand-new collaboration with superstar Enrique Iglesias on his new single "Finally Found You" (that Adam co-wrote and is featured on) will most certainly boost his profile as one music's brightest new talents to keep your eye on.

Adams' teaming with Iglesias comes hot on the heels of the unveiling of his new single "Only You" and "OK Cool," his pre-album (mixtape) which features a snippet of his other new track "All Night Longer."  Mixed by DJ Jayceeoh and featuring Clinton Sparks, the mixtape was recorded earlier this summer at the same time that Adams was in the studio working on his RCA Records debut. "This is the most excited I've been about a release for a while," the former college soccer champ says, "'OK Cool' embodies a brand, it takes me back to my roots of hip hop and rap while I progress on this lesson filled journey through the music business.

In an brief interview with me at MTV Video Music Awards last week, Adams also spoke enthusiastically about his new collaboration with Enrique Iglesias. "I'm really excited about it," he smiled. "We got the production from SoFLY & Nius, R3hab and Fabian Lensen, and Enrique put his whole own magical spin on it. We're so excited, because he's such a pop legend and I'm such a fan of his. It was a really fun project and it came together very nicely."

It's safe to argue that "Finally Found You" with Enrique Iglesias also marks Adam's big break into the pop world that is quite a bit different than his humble hip hop beginnings. "It's a great experience so far," he says. "Pop has an immediate impact. You see it right away. Especially since Enrique has so many fans who pay attention to everything he does."

"It's cool transition for me to go a little more pop," he adds. "It's a hard transition to make though going from hip hop and rap to the bigger realm of pop. It feels very comfortable though. Our shows have always been a mix of ingredients that usually wouldn't make up pop music, but it's great to to serve up this new dish of things." (Enrique Igleasias feat. Sammy Adams "Finally Found You" will be released on September 25.)