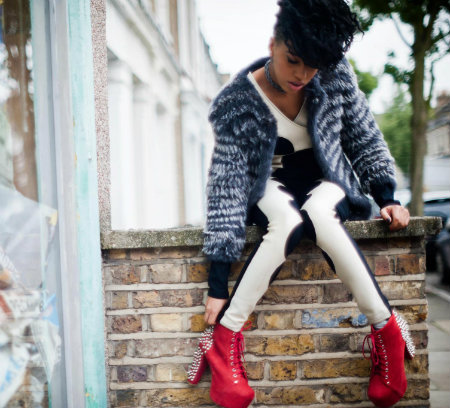 Big things are about to happen for emerging soul pop crooner Jetta who is about to explode onto the scene with her impressive debut single "Start A Riot" that will have you on the edge of your seat from beginning to end. The track was written by Jetta together with none other than James Eliot who just finished up producing Ellie Goulding's new album.

"Start A Riot" is a massive tune about breaking with the past once and for all. "My heart aches when I think of you. Let's run away, let's start a riot," she sings. "It's alright, let it all burn." Those lyrics are magnified by the song's soaring production stylings that emphasize the urgency of her call to action. Starting out slightly menacing in its brooding verses, the song finds a moment of peace in the pre-chorus before it crashes into its larger-than-life chorus that is ruled by pounding drums, fiery guitar riffing and Jetta's powerhouse vocals.

Born and raised in Liverpool, Jetta is a musician who has been quietly gathering interest for the last three years, impressing her peers with her outstanding writing skills and vocal prowess. She honed her craft initially as a backing vocalist, performing together with Paloma Faith and Cee Lo Green on tour. Her big break came when producer Jakwob handpicked Jetta for a guest appearance on his hit track "Electrify." which generated support from tastemaking BBC Radio One jocks MistaJam, Nihal and Zane Lowe.

With the unveiling of "Start A Riot," Jetta is ready to break out and spark a fire. She will give the song away for free on Twitter on October 22 so make sure to follow her to get all the details. To celebrate the release, she will also perform at London's iconic The Scotch (formally Scotch of St James) on October 23. Also, make sure to check out the video for "Start A Riot," partly shot by Jetta herself and directed by Eoghan Kidney that combines fragmented moody imagery and joyous, celebrative visuals.