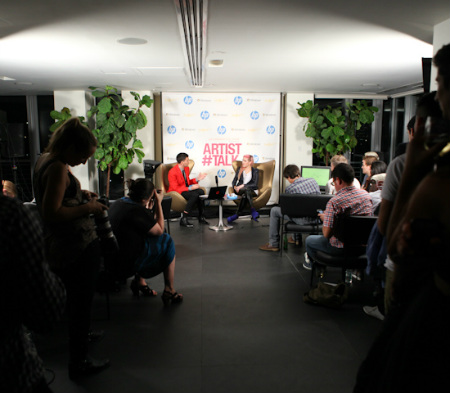 While holding steady on top of the singles charts in America with "Lights," Ellie Goulding is switching gears and promoting her new single "Anything Could Happen" that is available in the U.S. now. The track is taken from her highly anticipated (and fantastic) new album "Halycon" that will be released on both sides of the Atlantic early next month.

I sat down with the singer at my ARTIST#TALK live interview event for a full hour in New York City to talk about the inspirations for "Halcyon." Goulding opened up and talked very candidly about the emotions that influenced the album.

Capturing a period of profound change and transition in Ellie's life, "Halcyon" is very much inspired by feelings of love, loss and loneliness. Intensely beautiful songs like "My Blood," "Figure 8," "I Know You Care" and "Explosions" perfectly capture those emotions. But even though sadness lingers on "Halcyon," Goulding has a fine gift for always looking at the bright side of things, and servers up hope and joy in her brutally honest storytelling.

Check out a quick compilation video of ARTIST#TALK with scenes of the event and some highlights of my interview with Goulding in which she talks about working with producer Jim Eliot, the importance of hope and what water meant to her while recording this album. "Halcyon" will be released on October 8 (UK) and October 9 (US - Cherrytree/Interscope Records).