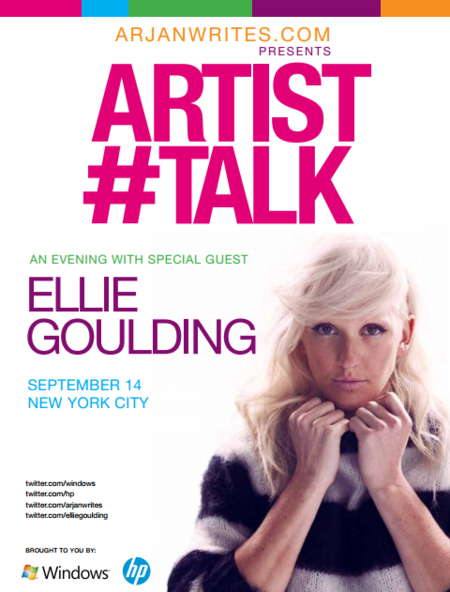 I'm thrilled to announce that platinum-selling British chart sensation Ellie Goulding will be the special guest at the next ArjanWrites.com ARTIST#TALK live interview event that I'm producing in partnership with HP and Windows on September 14 in New York City.

Following ARTIST#TALK events with artists like Flo Rida and Tinie Tempah, I'm very much looking forward to sit down with Ellie Goulding in front of a live audience to chat about the success of "Lights" and her new single 'Anything Could Happen." We'll also talk at length about her forthcoming new album "Halcyon" that will be released in the U.S. on October 9 through Cherrytree/Interscope Records.

This new installment of ARTIST#TALK is extra special to me because I've been an early supporter of Ellie Goulding and I look forward to catching up with the singer after her incredible rise to fame over the last three years. I was one of the first to blog about her music in the summer of 2009, saw her first big headline show at London's iconic Hammersmith Apollo in 2010, cheered her on at several South by Southwest gigs in Austin and attended the singer's kick-off show of her very first U.S. headlining tour in Atlanta back in 2011.

Much of the ARTIST#TALK conversation with Ellie Goulding will zoom in on her highly-anticipated new album, "Halcyon," which is the follow up to the singer's hugely successful debut album "Lights" which was released in 2010 and has gone on to sell one and a half million copies and generate five million single sales worldwide.

Developed together with HP and Windows, ArjanWrites.com's ARTIST #TALK is a tweet up meets listening session meets "Inside The Actor’s Studio" were I talk with musical guests in-depth about music, inspirations and craft. ARTIST #TALK is a small, by invite only media event but one superfan will have a chance to attend this very special evening. Stay tuned to learn how to win exclusive access to the event. In the meantime, don't forget to pick up Goulding's new single "Anything Could Happen" on iTunes now.