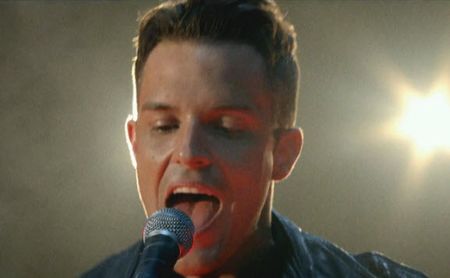 Hot the heels of their triumphant return to the concert stage this month, The Killers serve up the much-anticipated video for their new single, "Runaways," this morning. Set in the wide open space of a starry virtual universe, the video shows The Killers performing the song while the camera pans from side to side, zooming in on each of the band members.

The group's performance footage is interspersed with scenes of frontman Flowers superimposed on images of a glowing, Tron-like neon highway, a cloudy night sky and the bustling Las Vegas Strip while holding on to a custom-made red Rebel neon mic stand. All of those powerful visual ingredients add just the right amount of glitter and glam to the song's performance that fits its soaring qualities perfectly.

The video's futuristic aesthetic gives fans a few more clues about the visual direction and overall styling of the "Battle Born" project. The Vegas four have always had a strong eye on how their music is being packaged and presented, and after working with designer Paul Normansell on the mosaic design for "Day & Age," the group teamed up with Los Angeles designer Warren Fu to craft the imagery for "Battle Born."

Born and raised in Los Angeles, Fu started his career as a graffiti artist with a huge passion for everything '80s. Fu's life changed when he interned at Lucasfilm's Industrial Light and Magic, and was hired as an art director to help George Lucas on the production of Star Wars Episode III: Revenge of the Sith. "It was an 80s kid's dream, basically," Fu tells the Guardian about his work at Lucasfilm.

Working at Lucasfilm helped shape Fu's love for blending neon hues with slick space imagery and lots of '80s sci-fi effects to create a point of view that's best described as "retro-futuristic." Fu explains, "I love the past's vision of the future, there's something so charming about it." After leaving Lucasfilm, the young graphic designer dabbled in music video production that ultimately led to high-profile work for The Strokes, Nero, Daft Punk and Mark Ronson.

Fu masterfully applies his retro-futuristic design point of view to this new Killers video that shines in simplicity. Instead of going for plain and simple desert scenery (as many anticipated), Fu took his vision to a soundstage to boost the visceral qualities of "Runaways" by creating a galaxy from far, far away. He accentuates the group's electrifying performance by incorporating neon-lit, inter-galactic touches and other special effects that matches the song's grand atmospherics.