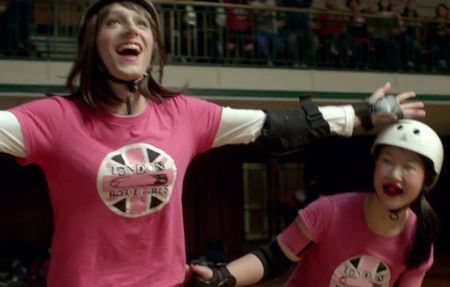 Just in time for the London Olympics, Pet Shop Boys give the freshly released video for their new single "Winner" an athletic touch by featuring London's famed Rollergirls that helps bring the overall theme of the song to life. The London Rollergirls is an all-women roller derby league that promote charity, teamwork and confidence in women by embracing all women regardless of body shape, occupations, sexual orientation, race or nationality.

Viewers get to meet some of the rollergirls including Dirty Diana. She is a trans London Rollergirl who is still new to the derby but finds her way around the track with the support of her fellow skaters. Dirty Diana's roller wife Sharon Scott describes it best when she comments in the video, "I want to help her grow into herself a little more while she's playing roller derby and help her to gain more confidence so she can develop into the woman she's meant to me," she explains.

It's a wonderfully touching story that perfectly accentuates the joyful spirit and all-inclusive message of the song. "Winner" carries a universal meaning and conveys that everyone who perseveres against the odds, loves and lives in the moment is a true winner. And even when life is getting you down, Neil Tennant comforts and reminds listeners that "in desperation you get inspiration," which captures the overarching sentiment of the song.

Winner is taken from the Pet Shop Boys' forthcoming new album, entitled "Elysium," that the group recorded earlier this year in Los Angeles. It's actually marks the first time in the duo's decades long career that the duo has recorded an album in the U.S. They co-produced the record with American producer Andrew Dawson who previously has collaborated with Lil Wayne, Beyonce and Drake. He also produced tracks on Kanye West's prog piece "My Beautiful Dark Twisted Fantasy" for which he received three GRAMMYs. (Purchase Pet Shop Boys "Winner" on iTunes.)