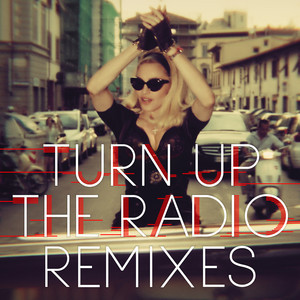 Get ready for Madonna to drop a mighty remix package of her new single "Turn Up The Radio" that is action-packed with four blistering revamps of the Queen of Pop's original tune. The forthcoming digital EP includes remixes from rapidly-rising newcomer R3hab, Offer Nissim, Martin Solveig and Laidback Luke who previously also remixed "Give Me All Your Love."

Madonna also throws her full support behind Far East Movement and invited the Los Angeles group to lay down some brand-new rhymes for the song to give "Turn Up The Radio" a little extra kick. Madonna has always had a knack for having her finger firmly on the pulse of what's new and what's next, so her endorsement of Far East Movement on this new edit of her single is a pretty darn big deal. Also, after featuring artists as diverse as Justin Bieber, LMFAO and Feist on their new album, Far East Movement's work on "Turn Up The Radio" once again underlines that the group doesn't shy away from trying something new to give true meaning to their all-inclusive approach to making music.

Holland's house hero Laidback Luke reworked the new cut of Madonna's "Turn Up The Radio" featuring Far East Movement and dramatically upped the energy by incorporating a raving new groove and punchy synth flourishes that help turn the original into a massive dancefloor filler. (Click here to purchase Madonna "Turn Up The Radio" on iTunes.)