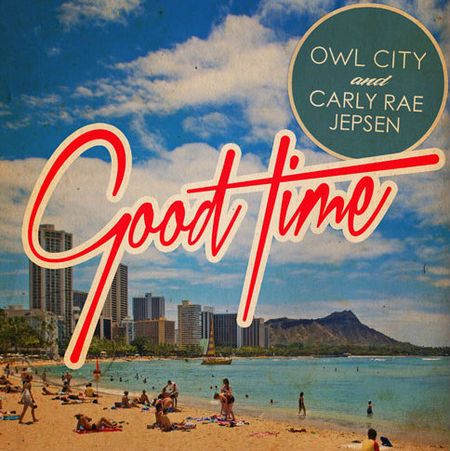 Following the release of his new "Shooting Stars" EP, synth-pop crooner Owl City (aka Adam Young) teams up with rising Canadian pop darling Carly Rae Jepsen on "Good Time," which is the new single for both of the artists. It's Jepsen's official follow up to "Call Me Maybe" (and will be included on her album) and it's also Young's new single that will be featured on his forthcoming new LP.

Together, Young and Jepsen serve up a warming slice of sunshine pop that is sure to stir up, you guessed it, a good time that comes just in time for the start of summer today. Young's immaculate and perfectly refined synth production on "Good Time" is the perfect fit Jepsen's candy-coated vocals that will surely continue to rule the charts this summer.

"Good Time" is taken from Owl City's upcoming full-length studio album, entitled "The Midsummer Station," due out this summer on Universal Republic. It's a project that was introduced by the "Shooting Star" EP and marked a change in creative direction for the singer. On his previous two albums, Young wrote and produced mostly by himself, but on his new project he enlisted a slew of other producers and writers to help him further evolve his sound.

Young collaborated with people like Matt Thiessen (Relient K), Stargate (Rihanna, Wiz Khalifa), GRAMMY-winning engineer Robert Orton (Lady Gaga, Darren Hayes) and the team of Josh Crosby, Nate Campany and Emily Wright (the latter known for her work with Dr. Luke). "It's exciting. It's kind of a new process for me," Young told Billboard.com earlier. "I really haven't ever done much co-writing or collaborating with other producers or writers. But that's what the last few months have been for me, doing different sessions with different people and experimenting. It's coming together nicely."

"It was a little bit scary at first, because I don't have a history of actually doing it," Young adds. "But there's something to be said about feeding off of another person's energy in the room and having another soul in the room to say, 'Here's what I hear -- what do you think?' How ideas evolve can be loads better that way than if it's just me by myself, second-guessing myself all the time." ("Owl City & Carly Rae Jepsen "Good Time" will be released on iTunes on June 26.)