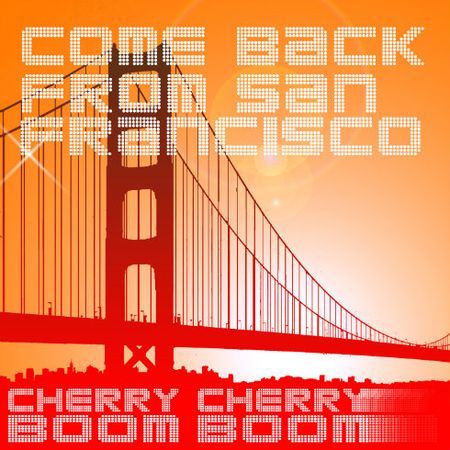 The timeless pop melancholy and romanticism of The Magnetic Fields' "Come Back From San Francisco" stirs up a flurry of emotions. The song's poignant storytelling combines feelings of loss and longing with sentiments of joy and sweet nostalgia that I'm sure people everywhere can relate to at one level or another.

Given the track's pop brilliance, it should come as no surprise that Martin "Cherry Cherry Boom Boom" Kierszenbaum decided to cover the song and infuse it with a contemporary synth pop vibe of his own. Kierszenbaum is one of pop's finest impresarios who has been instrumental in establishing the international careers of such diverse acts as Eminem, Gwen Stefani, Lady Gaga and Black Eyed Peas.

He's also the founder and chairman of Cherrytree Records, the pop alternative home of artists like LMFAO, Far East Movement, Feist, Robyn, Natalia Kills, Ellie Goulding, La Roux, Matthew Koma and many others. (Make sure to tune in to Cherrytree Radio to tune in to all the good pop 24/7 on the web and mobile device.)

Kierszenbaum is lauded for his finely-tuned ability to find and develop new talent. The fact that he's an accomplished and award-winning multi-instrumentalist, songwriter and producer helps that process tremendously. He relates to artists that he collaborates with as a fellow musician and not as a boardroom executive.

Fortunately, music fans will get to hear more from Kierszenbaum, the artist, when he releases his Magnetic Fields cover of "Come Back From San Francisco" using his Cherry Cherry Boom Boom moniker on July 10 on Beatport, iTunes, Amazon and other digital retailers near you. A full remix package will be released on July 10 as well that includes reinterpretations by Sven Kirchhof, Alvaro and Michael Woods.

Check out the exclusive premiere of Sven Kirchhof's remake of "Come Back From San Francisco" that perfectly amplifies the emotional intensity of the original. The remix kicks right into gear with with a euphoric piano riff that Kirchhof expertly layers over Cherry Cherry Boom Boom's vocal track. The song builds to a semi-climax that introduces a warming bass groove that stays true to the song's core sentiment. Highly recommended.( Follow Cherry Cherry Boom Boom on Twitter.)