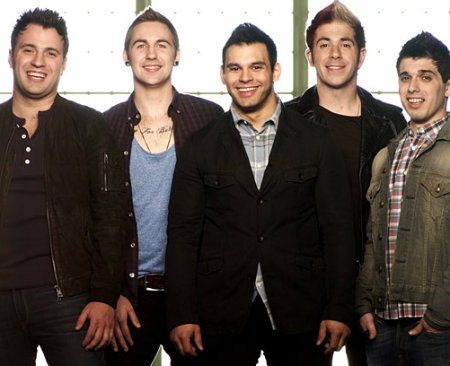 After a fierce (yet very amicable) battle among some of music's most promising new stars, New York power pop outfit Patent Pending was crowned this year's winner of the annual Battle of Bands competition last night at a live concert finale in Las Vegas. Six talented finalists competed to impress a panel of expert judges to win the gig of a lifetime and perform at tomorrow's Billboard Music Awards in front of millions.

Hosted by none other than Taio Cruz, the event was produced by leading music pub Billboard and the music loving folks at Chevrolet. The Detroit car maker has developed a reputation for showcasing some of the brightest new talents in their advertising efforts, and with Battle of the Bands they have taken an active role in finding, supporting and nurturing emerging talent. (Chevy also gave each finalist a brand-new Chevy Cruze to chronicle their journey to Las Vegas in a video series.)

Finalists Savannah Outen, Saints of Valory, Take the Day, Doe Eye and rappers After the Smoke all made strong showings during the finale but it was ultimately Patent Pending who swayed the judges with their irresistible and totally fun blend of pop and punk rock that they peppered with some synchronized, Justin Bieber-styled dance moves.

It was without a doubt a breakthrough moment for the punk-edged and pop-loving group who were gushing with joy after their win when I chatted with them. "It's been an insanely exciting journey for us," charismatic frontman Joe Ragosta tells me right after the show. "It all started 11 years ago when we first started playing in our basement. We've toured around the country forever and we worked very hard. We were given this amazing opportunity by Billboard and Chevrolet, and this whole experience is truly the greatest thing that has ever happened to us."

Bassist Travis McGee smiles and poignantly points out, "What's so amazing is that you hear all your life, 'work very hard and things will work out,' and I go 'yeah, tell that to a bunch of guys packed in a van with no air-conditioning who are touring for months on end,' but it turns out they are right!"

Patent Pending is scheduled to perform at the Billboard Music Awards on Sunday night in front of millions of viewers, plus some of their celebrity idols who will be in the audience. "These are not celebrities, they are gods of the entertainment world," Ragosta raves. "The fact that our idols at the show have to spend time watching us is amazing."

"We are just five normal dudes from New York and the surrounding areas who want to have fun and do it for for a living. Our music is just an explosion of fun and I think that helps on a day like this with Battle of the Bands. We just came out here and exploded like we always do and it worked out for us."

He adds, "It's crazy how things work out. Ten days ago we played in Dallas and we drove all the way back to New York. On the way home, we stopped at a Taco Bell that we can hardly afford and we still can't afford it, but we get to hang with Justin Bieber on Sunday!"