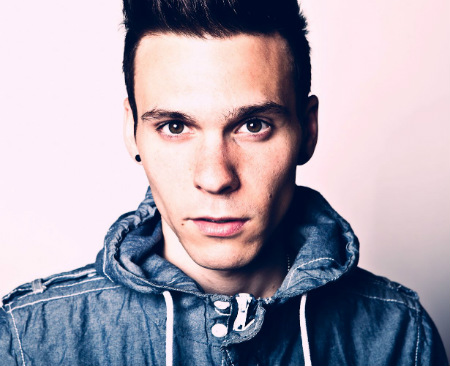 After his collaborations with people like Alesso and Far East Movement, rapidly-rising singer/songwriter Matthew Koma demonstrates once again that he has an incredible knack for writing and performing soaring melodic hooks. Case in point is his brand-new teaming with hotly-tipped DJ/producer Zedd (aka Anton Zaslavski) on "Spectrum," a stomping dance-pop romp with massive cross-over potential that perfectly combines Koma's sense of sentiment with Zedd's genre-pushing, micro-synth production stylings. "Spectrum" will be released on Interscope Records on June 4.

Inspired by artists like Bruce Springsteen and Elvis Costello, Koma is no stranger to writing timeless melodies that pack a powerful punch. He told me yesterday in an interview that partnering with DJs to write electronic dance music has been particularly helpful to further tune his craft. "It's been really cool to work with people like Alesso, Sebastian Ingrosso and Zedd," Koma tells me. "They're all very musical people and it's cool to see things through their eyes and it has inspired me to approach songwriting in a different way."

Koma explains that writing for dance music requires a bit of a different skill. "The electronic dance music world is so track driven and there's so much focus on the production that when it comes to songwriting it is even more about finding that simple sentiment and tapping into it," he says. "It's a totally different experience than writing a full song and it has been a really good learning experience."

He adds, "It's almost like using a different part of your brain. It's also often a different kind of audience that listens to dance music. They're looking for a different kind of feeling. It's definitely a different focus and all about honing in on a different feeling." (If you're curious about Matthew Koma, make sure to grab his brand-new EP "Parachute" that will be released on Cherrytree/Darkchild/Interscope Records next week. You can stream tracks from that release here.)