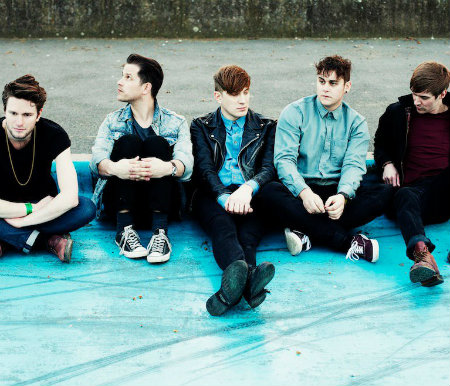 After the video for their first single "U Got The Power" turned into a viral sensation online, the self-proclaimed "pop sorcerers" of Swiss Lips burst back onto the scene with their fantastic new single, "Danz." It's a joyous slice of synth indie dominated by a bass-happy groove, rowling guitar riffs and shiny synth chords that make up the ideal backdrop for the big, anthemic chorus and soaring vocals that set the song apart. It's an undeniable floorfiller that perfectly balances crunchy production stylings with radio-ready pop sensibilities.

Sam Hammond, the charismatic frontman of the Manchester outfit, explains that Swiss Lips' songwriting aims to capture a youthful, can-do spirit that often comes with disappointment and disillusion. "Most of the songs we've written seem to be about looking back on being a teenager and that wide-eyed optimism about the world," Hammond explains. "You learn more as you become an adult and a lot of that [optimism] goes.

He references the inspiration behind "U Got The Power" to make his point. "The lyrics in that song I wrote about hanging out with people who were younger than me, and seeing the light in young people’s eyes when they’re mad for the world," the singers says. "People think it's about how being really young's great, but it isn't really. The refrain at the end, 'when I see the light coming from your eyes, I feel so paralysed.' That's actually really sad."

The new "Danz" is introduced by an equally fun video that features a senior dancing, grooving, bouncing and jamming along to the track. It's like "Gandalf meets Mick Jagger," comments one fan on YouTube. That pretty much sums up the genre-mashing qualities of the song that are imaginatively captured in the video. (For more about Swiss Lips, check out their web site.)