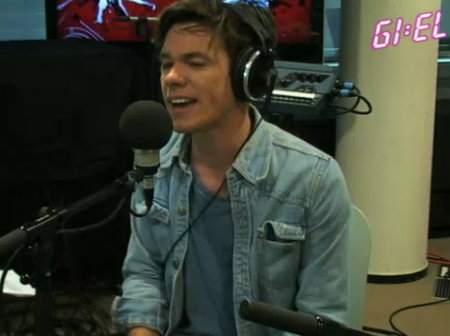 Nate, Jack and Andrew of Fun. are currently zigzagging around the globe to promote their breakthrough single "We Are Young" that is flying up the charts around the world after it was first featured in a Chevy Superbowl commercial back in February. The trio stopped by 3FM's popular morning show in Holland with host Giel Beelen earlier today to play their smash single, plus they performed a funtastic little cover of Carly Rae Jepsen's "Call Me Maybe."

In an interview prior to the studio performance, DJ Giel Beelen noted that Holland recently celebrated 10 years of equal right for gays and lesbians, and asked the group about their ongoing support for gay marriage in their own country. "America is not as forward as some other places in the world," Fun.'s Jack Antonoff explains. "It's nice to come to countries where you don't have any second-class citizens because everyone's equal. That's a good feeling right off the bat. Whenever we know we're going to be somewhere that has equal rights we just get like a warm feeling in general about the place."

Antonoff says about President Obama's recent support of gay marriage that it is "hopefully the start of a big change in America." The guitarist adds, "It's a human rights issue and the biggest issue of our generation, and if you're not saying something then you're part of the problem ( . . .) We're straight, and that's a big part of our stance and we still care and everyone should care, gay or straight."