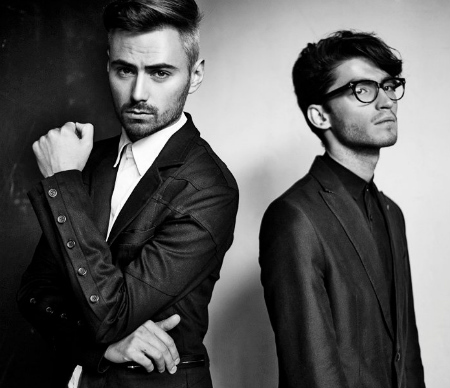 If you miss the era of Duran Duran, Prince, INXS, New Order and glossy '80s synth pop, then you must check out the blazing, retro-styled pop of rapidly rising Russian duo Tesla Boy. It's like taking a step back in time with a band that's totally here and now. Tesla Boy is the teaming of charismatic frontman Anton Sevidov and basist Dima Midborn who are about to make a major push stateside with their new single "Fantasy" that will be released on May 22.

Growing up in the '80s and '90s in Moscow, Anton and Dima experienced first-hand the dramatic changes that took place in Russia when the cold war came to a close, Perestroika ruled and a wind of change swept the nation. The new cultural zeitgeist of openness and transparency also embraced Western pop culture that made a tremendous impact on the two young musicians who devoured all the great pop and synth music from abroad as soon as they could.

To this day, Anton and Dima unapologetically relish in everything '80s in their music, performance and overall visual expression. It seems a way for them to make up for some of the lost time when they were younger and political circumstance prevented them from truly experiencing '80s culture. In an interview with MTV Iggy, they quickly summed up some things from the '80s that has inspired their work, "VHS, Soviet PEPSI, LINN drum, Roland Jupiter, Purple Rain, Let’s Dance, Gorbachev, Reagan, Playboy covers," the group explains.

The '80s era also influenced Tesla Boy's artistic process that always starts out with "keyboards and vocals," according to Anton in an interview with Syncopation Magazine; "I love to spend a lot of time with my keyboards, searching for the right sound for the track. (. . .) Usually, everything begins from an idea of a track, then I start to play my piano and try to find the right chords, whilst at the same time try to sing some melodies and then I go to my computer and start creating a drum groove."

One of the latest tracks the group has shared with fans is the new wave inspired "Waste My Body." A potent pop romp fueled by flaming synths, a bouncy bass, a glorious sax solo, and lots of '80s-styled bells and whistles that result in a tune that is retro in its origin, but forward in its execution. Very highly recommended.