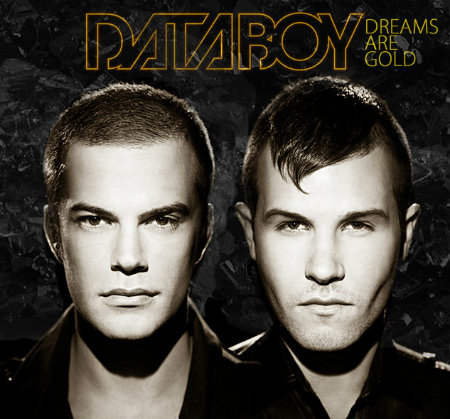 After I first met Databoy's Cameron and Adam at a Lights gig in Austin, Texas, the electro pop duo has embarked on an exciting musical journey that has taken them to New York to work with some of pop's finest producers to engineer a unique sound of their own. All of their hard work, patience and perseverance has resulted in their debut album, entitled "Dreams Are Gold," that will be released in a digital download store near you next month.

To give us a taste of what they have been up to in recent months, the duo is sharing the "Summer Now" EP that you can download totally guilt-free on their web site now. Pop lovers will sure be in a for a big treat with this new Databoy EP that stays true to their clearly-defined pop mantra. "We're a spontaneous combustion of everything you love and love to hate about pop music," they write on their web site. We're kids of the '90s, born in the '80s, inspired by the sounds of the new millennium. We are an unconventional duo, addicted to the art of sound and the sound of art."

The "Summer Now" EP release includes a remake of the previously shared "Just Once" that was mashed up with Rihanna's "You Da One" to give the original a breezy summer flavor. Also, featured are the pop-forward summer gem "Lotion" and the very good "8-Ball," a playful, synth-happy stomper with a mighty infectious chorus. It's one of those high-grade pop confections that easily fits alongside tracks by The Wanted, One Direction and other current chart-topping Brit pop.

The group is excited and writes me, "Our first release this year, 'Memorize Me' with Rune RK, has received over 175k hits on YouTube so far and we're hoping to build on that success with the release of a lot of original material over the next few months." The release of the LP has been long in the making, and if this EP is any indication, "Dreams Are Gold" is shaping up to be a mightily exciting pop effort.