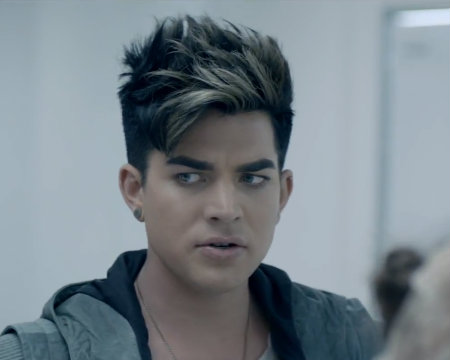 Adam Lambert perfectly balances style and substance in the freshly unveiled video for his new single "Never Close Our Eyes." Lambert makes a powerful statement in the video that goes way beyond the literal meaning of the song. In fact, the video neatly encapsulates Lambert's distinct brand of pop, which emphasizes the importance of individuality and self-expression no matter what other people say or think.

Set in a repressed Orwellian society, Lambert's video depicts a bleak, futuristic world with people being treated as slaves who must submit to a totalitarian regime that rules with an iron fist (and many watchful eyes). True to form, Lambert breaks out of the mold and sets off a firestorm of change that inspires others. He refuses to take his daily dose of mind-numbing medication and resists other brain-washing techniques to end up leading a colorful rebellion that crushes the status quo.

Fans will agree that even though it may seem that the scenes and storyline are taken from a fantastical sci-fi novel, the concept of the video is really not that far removed from Lambert's own world of experience. Despite the odds and the baseless skepticism from naysayers, Lambert defiantly stayed true to his point of view and artistic convictions. Now ruling the album charts with his new album "Trespassing," the pop star shows that people who patiently and passionately follow their instinct without compromise will ultimately win.