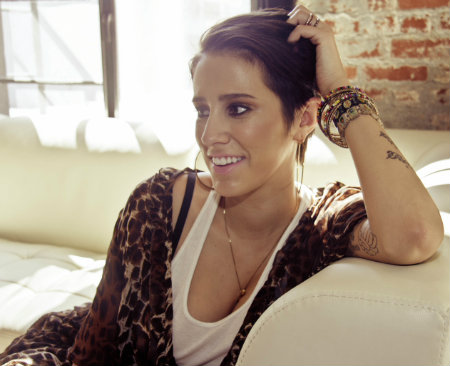 German pop rock outfit Nena original wrote and recorded "99 Luftballons" as a fiery political statement in the early '80s to voice their opposition against the expanding proliferation of nuclear weapons in the final days of the Cold War. Originally sung in German, the song touched a nerve and perfectly captured the concern of a generation, which led to chart success for the single across Europe. North America quickly turned on to Nena as well after the group released an English-language version of the song, titled "99 Red Balloons," stateside in 1984.

Today, almost 30 years later, rising pop sensation Dev unveils a cover of "99 Red Balloons" that she recorded a little while ago but is now finally sharing with the world. On this synth-driven revamp, Dev turns down her dance pop sass to make way for her gentle and sweet side that fuels this new version of "99 Red Balloons." As demonstrated by this cover, Dev is a pop chameleon who continues to impress with her versatility, flawlessly bouncing between booty-shaking club jams and elegant balladry.

Dev's accomplished cover also underlines the timeless quality of Nena's original. Even though the world around us has changed a lot since Nena first wrote the song, the track's message of peace and tolerance is now more relevant than ever. While enjoying this freshly-unveiled new Dev tune, make sure to grab her excellent debut LP, "The Night The Sun Came Up," which is available on iTunes now. (A big thank you for Dev World Daily for the heads up about Dev's cover of "99 Red Balloons.)