Listen to Aiden Grimshaw "Is This Love" New Single Premiere 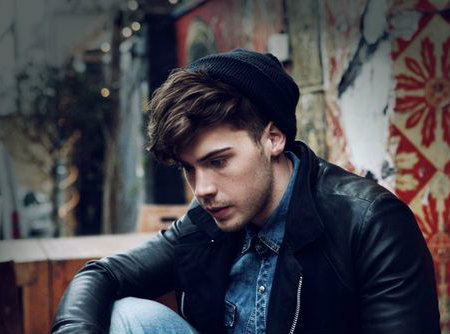 As long as he can remember, Aiden Grimshaw wanted to perform. After attending the Michael Hall Theatre School and stealing the show in his junior high production of Grease, Grimshaw was certain that a career in music was something he wanted to pursue. He worked at a local Pizza Hut in Blackpool and was offered a job as an entertainer on a cruise ship, but after high school Grimshaw decided to audition for The X-Factor instead and try out his luck.

He chose to perform an acapella version of Kayne West's "Gold Digger" that ended up taking him all the way to the show's finals in 2010 and garnered him many new fans, including Simon Cowel. The pop mogul was impressed by Grimshaw's first appearance on the show and raved, "Now that's a pop star" during the first judging round.

After concluding his stint on The X Factor, Grimshaw left a strong impression with audiences as a powerful pop vocalist with a penchant for changing things up. He moved to London to start working on original material and further tune a unique sound of his own. He explains in a press release that he was introduced to plenty of big name writers and producers, ending up crafting songs that "usually sounds a little bit like Adele or whoever else is big at the time, and a little bit like you. But not really like you."

Things were different when he met producer/writer Jarrad Rogers (Lana Del Rey, Tinchy Stryder) who immediately understood the sound Grimshaw was going for. "Instead of trying to get number ones, we were just writing songs, vibing off each other," Grimshaw explains.

One of the first tracks they wrote together is Grimshaw's new single "Is This Love" that will be released in the U.K. on July 3. The song perfectly defines the singer's distinct brand of pop that is nothing like the cookie-cutter fare you may expect to hear from a reality TV contestant reaching for the big time. Featuring an explosive, drum and bass groove and Grimshaw's soaring vocals, "Is This Love" shows that the rising pop star has moved far beyond his days on The X Factor while understanding the quality of his performance that the show's fans loved about him most.