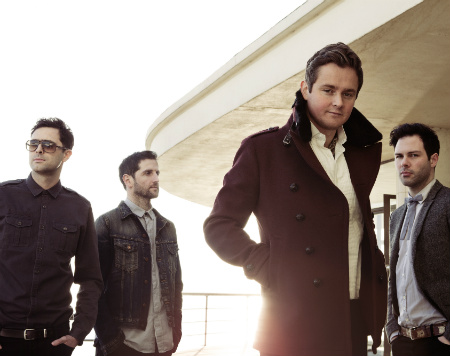 Rapidly rising Swedish DJ and producer Alesso shows off his very fine knack for melody on his shiny new remix of Keane's fantastic new single "Silenced By The Night" that premiered on Pete Tong's BBC Radio One show during the Winter Music Conference in Miami, Florida.

Alesso smartly maximizes the melancholic essence of Keane's original and intensifies its joyful spirit with a few powerful new sonic twists that include a hyper-melodic new electro pulse that explodes into a soaring, stadium-sized new synth riff that instantly brings on the goosebumps. Alesso's remix of Keane "Silenced By The Night" pretty much picks up at the high where Avicii's "Levels" left off, and will surely be a massive smash that will take over dancefloors all spring and summer.

This remix is Alesso's third big pop-savvy release this season. His 2011 EDM breakout smash with Sebastian Ingrosso, entitled "Calling (Lose My Mind)," will be rereleased in May through Atom Empire/Interscope and features the vocals of pop hot man Ryan Tedder that were penned by Matthew Koma, one of Cherrytree Records' most exciting new signings. Koma is also featured on Alesso's forthcoming new dance-pop stomper "Years."

In a recent interview, Alesso was asked about Sweden's ongoing love affair with great, timeless melodies that now also marks the work of a new generation of Swedish DJs, like Avicii and Alesso. "I have no idea why that is," he smiles. "It could be the weather [in Sweden], you know, you have to find something to do. The winters are bad and the recent summers haven’t been great, so maybe it gives you a little bit more time to work on stuff, like music."