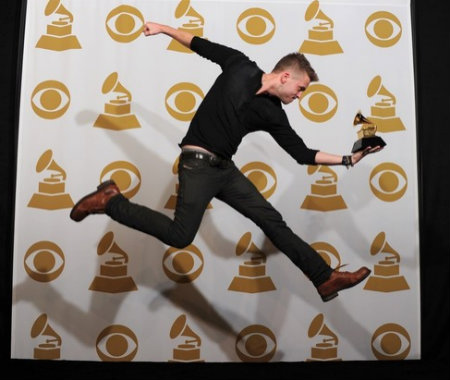 After missing out on several GRAMMY Awards in the past, Ryan Tedder could not be happier about winning a GRAMMY Award for his work on Adele's chart-topping "21" at this year's GRAMMY Awards. Tedder spoke at length to a small group of reporters at The GRAMMYs about his respect for Adele, the creative process behind his songs on "21" and some of his upcoming projects. The very talented Denver-based singer/songwriter also provided a few clues about his work on Beyonce's new album that is currently in the very early stages of production.

Tedder was very happy to see Adele back on stage performing during The GRAMMYs. "I was at her last performance where she damaged her voice in Denver," he explains. "She had cancelled one concert earlier and I texted her to see if she was going to make it to Denver and she said, 'Yeah, I think I'm going to make it.' And when she came out and she did her first song, I knew something was wrong. [Her] adrenaline kicked in and she pushed through but that's when you do the most damage and by the end of the night she was done and she cancelled the rest of the tour."

Prior to working with Adele, Tedder was a huge fan of the singer and often listened to Adele's "19" to sooth him during extensive overseas tours with OneRepublic. He admits that he cancelled a studio session with "another major pop star who is ruling the airwaves right now" to be able to work with Adele. Coming from "the Nashville school of songwriting," Tedder first sat down with Adele to get to know her before doing any writing for her or discuss song ideas.

He specifically talked to me about the inspiration behind "Turning Tables." He explains he was watching the video for "Hometown Glory" and listening to "Chasing Pavements" while thinking what kind of "weird phrase or situation" he could come up with that would resonate with her. "The thing is that you can't write a big pop song for Adele. It would be a disservice," he tells me. "I had the phrase 'turning tables' and literally just pictured her voice (. . .) She walked in and I pitched the idea for the song and she said that that it was exactly about what she was going through in her relationship."

Tedder also talked about some of his upcoming projects after I asked him what was next for him after The GRAMMYs. Not only did he mention B.o.B's new single and his project with K'Naan, but he also provided a few clues about new work with Beyonce. (Tedder previously co-wrote Beyonce's "Halo" together with Evan Bogart and Beyonce.)

He explains, "Conversations about [Beyonce's] next album literally just started (. . .) All I can say is that [when you work with Beyonce] you feed her the best that you have. She is like this phenomenal filter. She takes it all in and she can identify what the next thing is. She's not interested in 2012, [but in] what's 2013, what's 2014. Without question she steals the show. She's one of those artists, much like Adele, there's a handful of artists, that are not relying on guys like me to walk in and be like "here, sing this!" (. . .) Beyonce, you just let her go, you know. She's ridiculous, she's the best."

Tedder also notes that the next OneRepublic album is a major priority. The group is working with GRAMMY winner Paul Epworth and Phoenix producer Philippe Zdar on tracks for this record. "We really feel that this could be our big break out album," he concludes.